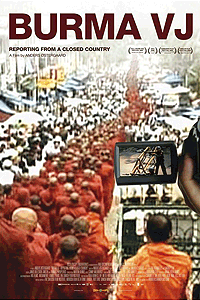 BURMA VJ is a documentary that patches together smuggled footage to tell the story of the 2007 protests in Burma by thousands of monks. Inge Sargent, founder or Burma Lifeline, will be onhand to introduce both screenings and to do a brief Q&A after the first screening only. The IFS screens BURMA VJ in part to mark the 10th year of Burma Lifeline, which has raised over $700,000 so far to help refugees.

As we've learned from Iran, if there's one thing a dictator fears more than UN resolutions or sanctions, it's the internet.

There's nothing like online footage of soldiers shooting civilians to hammer home a despot's cruelty - and judging by this electrifying documentary, the junta running Burma is among the world's worst.

Using video shot and then posted online by the outlawed Democratic Voice Of Burma group, this film follows the pro-democracy protests that gripped the Asian country in 2007.

With the economy in deep trouble, the time seemed right for freedom to flower.

But the marchers - led by thousands of monks - hadn't reckoned on the junta's determination to hold on to power at any cost.

Despite being shot almost entirely on jittery handicams, Burma VJ (Video Journal) is as gripping as any Hollywood thriller - and as heartbreaking as any weepie as we watch the celebratory mood that briefly blossomed in Rangoon give way to appalling violence.

NOTE: This gripping documentary screened to a packed theater at the Boulder International Film Festival and is being brought back to mark the 10th year of the Burma Lifeline, which was founded by Inge and Tad Sargent. Inge Sargent will introduce both screenings and be around for a short Q&A after the 7pm show.