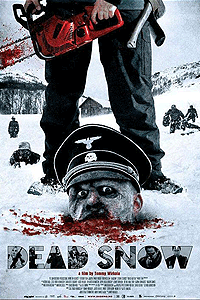 SNOW DOESN'T STOP IFS! BOTH SCREENINGS ARE STILL ON FOR TONIGHT!

Stop me if you've heard this story before. Two cars full of young people—here, medical students on Easter vacation—are headed into the mountains. Surrounded by snow and craggy peaks and not much else, they eagerly anticipate their adventure. Martin (Vegar Hoel), in the boys' car, starts reading from a magazine, a story about a young man lost in the mountains who called out for his dog. His three companions shake their heads. "Avalanche," they conclude. "Not smart."

No, you probably agree, it sounds unwise. But as the boys in Dead Snow ( Død snø) go on to ponder the consequences of being buried in snow—how to find your way out of a drift when you're feeling disoriented, for instance—they don't sound especially smart either. They're imagining a weekend in a cabin, full of drinking, hiking, and racing on snow scooters. When they park the car, zip up their jackets, and start trudging through endless whiteness, the crew reveals as well that they should know better. "How many movies start with group of friends on a trip to a cabin with no cell phone signal?" asks designated movie nerd Erlend (Jeppe Laursen). As they call out titles— The Evil Dead, April Fools Day —it's clear that they've seen a slasher movie or two. And yet here they go, just like the victims they've seen meet bloody ends, climbing merrily toward their own.

All of which is to say that Dead Snow knows exactly what it is. Even if the kids are surprised to meet a crotchety "Wanderer" (Bjørn Sundquist) up at the cabin, you know pretty much what he's going to say as soon as he's arranged himself on the couch, arms stretched out and brow furrowed, complaining about their organic coffee and calling them "small spoilt brats" who surely couldn't have been bothered to read up on their vacation destination's "local history." Not that it would have done them any good, of course, for the tae he tells is one that "people prefer to keep quiet about."

As the camera pushes in on the Wanderer oh so slowly, he reveals to his dumbfounded audience the dreadful past of this terrible place, involving occupying Nazis and the Norwegian villagers who wreak nasty vengeance upon them with scythes and axes and knives, "anything, he says, "that might break a skull." No one knows exactly what happened, he warns, but it was very very bad. "One must tread gently," the grumpy guy says, "There is an evil presence, an evil one does not want to awake." Given the detail that Germans were commanded by a Colonel Herzog (Ørjan Gamst), well… your own imagination might be running toward the macabre about now, but his listeners look mostly blank, with Roy (co-screenwriter Stig Frode Henriksen), earlier deemed "the horniest guy north of the Arctic Circle," assuring their guest that because they're medical students, they'll "do all right." Mm-hmm. And they'll be right back, too.

Tommy Wirkola's movie makes good slow fun of this conventional build-up, and once the Nazi zombies make their appearance, it hardly matters how they came into being or what they're after. Roaring and lurching and gnashing the bits of teeth they may have, the zombies roil up from the bitter cold earth, their cheeks decomposed, their mouths caked with blood. Silent—save from snarls and gurgles and a single, spectacular command from Herzog—they pitch themselves at their victims, beyond self-control yet also following orders, grotesque and comic at once.

The victims, as in all slasher flicks, range from plucky to silly, with the requisite oversexed girly who must be punished and the smug, willfully dim boys who never quite catch on. Hanna (Charlotte Frogner) early on shows a clear perspective, impatient with brutal hijinks (her boyfriend Martin thinks it's cute to pretend to smother her with a pillow, she's not so keen on it) and possessed of a moral sensibility. She insists on looking for missing comrades and making plans for survival. Willing to sacrifice herself for Liv (Evy Kasseth Røsten), Hanna also sees the sense in not "splitting up" (as so many slasher movie girls tend to do). Hanna is also the one who, during the final fights with zombies—that inevitable sequence when the diminishing numbers of survivors are separated and so the film cuts back and forth among them—figures out that climbing a tree is a good way to avoid the not-so-bright monsters' gazes.

Her friends are not so clever or determined, though at least a couple of them wise up (or at least speed up) when facing down Nazis in various states of decay and variously energetic. Where Roy is prone to saying things that make him seem like dead meat ("Typical of women: they scare easily"), relatively noble boy Vegard (Lasse Valdal) has a mission in mind, which is to find his missing girlfriend Sara (Ane Dahl Torp), is on his own almost immediately, his trundling over tundra enhanced by his skidoo, which he eventually outfits with a machine gun conveniently discovered among the Nazi soldiers' detritus (apparently, they still bivouac, though their sites tend to be grodier and darker than in 1942). Even as he fights back against one horrific specter after another, Vegard keeps his wits about him, reattaching his own ripped flesh with sutures and duct tape.

Trying to get back to the cabin, Vergard is again and again assaulted, in the abject darkness of under-ice caves, but more often against a blasted-bright-white snowscape. The effect is gorgeous and not a little spastic, black spider branches spreading across the frame, broken limbs flying, blood splatting against the lens during grunty, desperate fights, and oh yes, the growling of a chainsaw Martin happens to find. Gonzo zombies in winter: that's a story that almost sounds new.