A gripping experience of manipulation and retribution 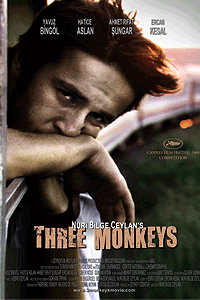 At the Cannes Film Festival, Nuri Bilge Ceylan received the Best Director prize for his masterful combination of image and sound in Three Monkeys, which he also co-wrote. Unlike Ceylan's earlier films like Distant, which received multiple awards at Cannes, his latest has an intricate plot line, one of adultery, suspicion and revenge. Like the three symbolic monkeys, characters futilely attempt to avoid seeing, hearing and speaking the truth. With touches of a Turkish film noir, Celyan's Monkeys could draw a moderate arthouse audience, larger than for his previous works.

Ceylan makes exceptional use of sharp high definition video imagery. The cinematographer, Gökhan Tiryaki, recently collaborated with Ceylan on Climates. In a superbly filmed opening scene, automobile lights disappear into the dark distance and the sound of an accident is heard. A body lies in the street; the driver who hit him is in hiding when another car drives by and the license plate of the abandoned vehicle that hit the pedestrian is seen. The driver who caused the accident is Servet (Ercan Kesal), an ambitious politician. Not wanting to affect his career and the upcoming elections, Servet offers his driver Eyüp (Yavuz Bingol) a lump financial sum to claim responsibility for the accident, saying that the jail sentence will be six months, a year at the most. He adds that he will continue to pay the driver's salary to Eyüp's teenage son Ismail. Eyüp agrees to the proposition.

During Eyüp's incarceration, his wife Hacer (Hatice Aslan) begins an affair with Servet. Being paid his father's salary without having to work, Ismail (Rifat Sungar) remains bored, sleeping into the middle of the day. He's disinterested in finding a job and discovers the truth about his mother and Servet. Eyüp's return from prison forces a change from the new patterns of his family.

As in his other films, Ceylan gives significance to visual details. Hacer's bright red underwear is in sharp contrast to the somber colors elsewhere. Her husband remarks that she never used to wear things like that. Close-ups emphasize the escalating emotional tension of the characters. The director also makes effective use of his characters in relation to the surroundings that reflect their personal conflicts. Servet considers both Eyüp and his wife disposable and tries to break off his involvement with Hacer once her husband has returned from prison. Outdoors, Hacer desperately confronts Servet as storm clouds gather. The sounds of wind in the house and rain on the roof add an ominous tone as Eyüp becomes increasingly aware of the differences in his wife and son.

Ceylan orchestrates all the elements of his film into a gripping experience of manipulation and retribution, with an ironic final twist.