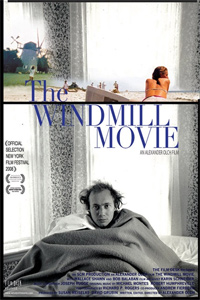 Before his death in 2001, prolific filmmaker Richard P. Rogers had spent 20 years struggling to make a documentary about himself. He left behind 200 hours of footage that his widow, acclaimed photographer Susan Meiselas, turned over to his former student Alexander Olch.

Now, Olch has constructed the 82-minute "The Windmill Movie," an assemblage of myriad pieces that offer a fascinating portrait of Rogers' life.

Olch unleashes a flow of fragments, revealing that Rogers moved in a world of impeccable taste -- a handsome summer home in the Hamptons, a vast loft in a Victorian building in Manhattan, friends who always dressed with a casual perfection. Those friends included actors Wallace Shawn and Bob Balaban, both of whom appear in the film.

Olch doesn't make it easy to identify with Rogers and his stylish existence, but that choice begins to pay off gradually as the fragments start to add up to something more.