Eccentricities of a Blond Hair Girl 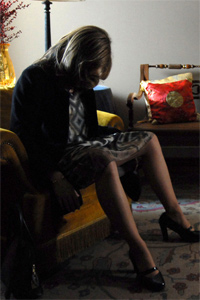 The cinema's most senior filmmaker, Manoel de Oliveira, brings us this deceptively simple, perfectly set gem. While on a train, a beleaguered man recounts his troubles to his sympathetic neighbor. He is Macário, who worked for his uncle's shop and fell madly in love with the blond-haired beauty who lived across the street from his office window. Every day he would spy on her as she coquettishly waved her Chinese fan. But an unexpected twist intervenes, and de Oliveira's detached irony, whimsical characters and anachronistic storytelling turn this miniature morality tale into another of his lasting accounts of thwarted love.

Eccentricities of a Blond Hair Girl