The Girl Who Played with Fire

The much anticipated sequel to The Girl With The Dragon Tattoo 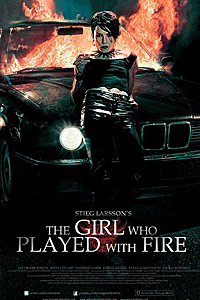 The screen adaptation of the second crime novel by the late Stieg Larsson in the Milennium trilogy has Daniel Alfredson taking over as a director and Jonas Frykberg writing the screenplay.

Fans of the books and the first movie can take comfort in the return of Noomi Rapace and Michael Nyqvist in the key roles of computer hacker Lisbeth Salander and investigative journalist Mikael Blomkvist. This faithful cinematic version follows the book perfectly. It is highly recommended that you watch “The Girl With the Dragon Tattoo,” which is now available on DVD, before you go to see this film.

The movie begins one year after the first film with Salander returning to Stockholm after traveling abroad. She breaks into the apartment of her guardian Nils Bjurman (Peter Andersson) and reminds him of their deal. Her leverage is the DVD she made of him raping her.

To fulfill his end of the bargain, he is required to file positive monthly reports about Salander with the court. She has discovered that he plans to have the inscription (“I am a sadistic pig and a rapist”) that she carved on his belly removed. She threatens to put it on his forehead if he keeps his appointment with the tattoo removal clinic in France.

Salander still has the dragon tattoo that takes up most of her back. It is displayed prominently in the opening scene when we see her sitting naked on a bed.

Salander has purchased a new luxury apartment and taken out a post office box. She is reunited with her lesbian lover Miriam Wu (Yasmine Garbi). She gives Wu her old apartment where the rent has been paid for a year in advance. She asks Wu to take care of her mail since this address will continue to be her legal residence. She doesn’t disclose the secret location of her new digs.

Salander also goes to visit her prior guardian Holger Palmgren (Per Oscarsson) at a nursing home where he is recovering from a stroke. She shows a compassionate side with him that we rarely see.

Executive editor Blomkvist and married publisher Erika Berger (Lena Endre) continue their friends-with-benefits relationship. They are enthusiastic about a story for the next issue of the magazine. Dag Svensson, a young, ambitious freelancer has spent four years meticulously researching sex trafficking in Sweden of underage girls from Eastern Europe. He has concentrated on the suppliers and a client base of prominent citizens in high society, including government officials.

Svensson’s live-in girlfriend, Mia Bergman, has titled her Ph.D. thesis “From Russia with Love.” It concentrates on the women used as prostitutes and how the legal system has ignored this illegal practice.

Svensson agrees to a two-month contract with Milennium. He only needs to do a little bit more fact checking by confronting the johns named before publication of the article. Complications arise when Blomqvist finds Svensson and Bergman murdered in their apartment. The gun identified as the murder weapon belongs to Bjurman and has Salander’s prints on it. Later, Bjurman turns up dead.

The police investigation is led by Inspector Jan Bublanski (Johan Kylen). Salander sees the wanted posters suspecting her in the triple murders. The film becomes a combination police procedural and action thriller.

Blomqvist is sure of Salander’s innocence, because he knows that she despises men who hate women. Both Salander and Blomqvist play amateur private eyes with separate investigations. Each comes from a different angle in solving the mystery of whodunit and the motive behind it.

We learn a lot about Salander’s tormented past that includes an incident involving her deliberately playing with fire. Other key characters are a tall, blond-headed German with a muscular build who is unable to feel pain and a crippled, disfigured former high-ranking Soviet intelligence officer who defected to Sweden.

The story keeps you on pins and needles as layers are peeled away like an onion. Lives are placed in danger as Salander and Blomqvist dig deeper to uncover the truth. Sex, nudity, brutal violence and two exciting car chases are part of the entertaining stew.

Rapace is brilliant and so sure of herself in the lead role. She burns up the screen with her intensity and you can’t take your eyes off of her. Nyqvist garners your respect and admiration for embodying this concerned individual who exposes in print the crooked and corrupt practices in Sweden while protecting his sources. They share only one scene together at the end of the movie.

The song over the end credits, “Would Anybody Die (For Me),” appropriately sums up the tenuous friendship formed mostly through cyberspace between Lisbeth and Mikael. As the lights come up, you have become so immersed in this story that you can’t wait to see what happens next. The ultimate fate of many of the key characters is left up in the air. (K. Cohen, Sun Publications)

The Girl Who Played with Fire