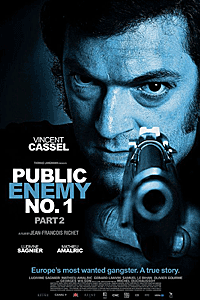 “There are no heroes in crime!” sighs Vincent Cassel in the second half of Jean-François Richet’s enthralling biopic of French gangster Jacques Mesrine. .

If Public Enemy Number One is to be believed, however, Mesrine undoubtedly thought of himself as an anti-hero, particularly in the later stages of a career that saw him courting the media, showing off in the dock and writing a self-glorifying autobiography. .

If Cassel was feeling his way through Mesrine’s contradictory character in last month’s Killer Instinct, he most surely finds his footing in a longer instalment that revels in the swaggering bravado and near-suicidal recklessness that defined his final six years on the lam. .

Beginning with one of two daring escapes from police custody, Enemy shows him putting on weight, donning a variety of disguises and allying his criminal enterprises to radical ’70s factions like the Baader-Meinhof gang. With ego comes mania, though, typified by a disturbing sequence where he abducts and tortures a journalist who mocks his pretensions. .

With Cassel so rarely off screen, it’s harder for his co-stars to make their mark this time around. Although Mathieu Amalric offers an interesting counterpoint as a fellow bank robber perturbed by his cohort’s grandstanding and Ludivine Sagnier is a breath of fresh air as Sylvia, the gamine girlfriend who miraculously walked away from Mesrine’s very public execution in November 1979. .

Seen through their eyes in Part One, the shooting is replayed from the flics’ perspective in a climax that is drawn-out enough to warrant comparison with Johnny Depp’s slaying in Public Enemies. .

Watching Cassel being wheeled away from his date with destiny, you’re left aware that crime does not pay, but also that, when push comes to shove, cops and crooks can be as ruthless as each other.

Tonally different to its predecessor but just as engrossing, this dark wrap-up to Richet’s exciting saga sees Cassel go down with all guns blazing. A terrific conclusion to the best French double-whammy since Jean De Florette and Manon Des Sources.