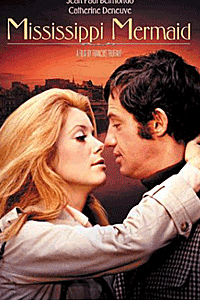 As Ty Burr of the Globe Newspaper company writes:
“Mississippi Mermaid’’ is a film noir shot in dazzling color, a Hitchcock movie with the soul of a Jean Renoir drama. The latter is this movie’s dedicatee, and his humane vision of the animal that is man is very much in evidence. Yet all we see for a while are Hitch and crime novelist Cornell Woolrich, whose 1947 “Waltz Into Darkness’’ serves as the film’s source. Jean-Paul Belmondo plays Louis, a French plantation owner on the African island of Reunion, who sends off for a mail-order bride; she arrives in the stunning person of Julie (Catherine Deneuve), so it almost doesn’t matter that she looks nothing like the photo that preceded her.

When “Julie’s’’ game finally becomes apparent, though, the movie shifts into a slower, more emotionally raw gear, as Louis’s devotion to his bride knows no legal or criminal bounds. Where another filmmaker might play the character as a masochistic sap, Truffaut sees a beautiful fool, and the movie is most touching (and occasionally silly) when Deneuve’s character recognizes it, too. Renoir famously said that everyone has their reasons, and Truffaut’s codicil here is that all those reasons rise from the ache to connect.