The Nature of Existence

A spiritual and humorous journey into life, belief, & reality 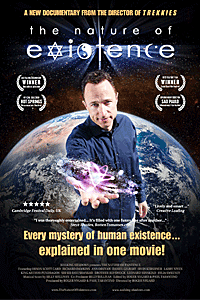 THE NATURE OF EXISTENCE is a documentary that is sort of a "Whitman's Sampler" of religious, metaphysical, and philosophical beliefs and opinions from all over the world. Roger Nygard gives us a non-judgmental survey of what people think about the biggest questions of life. Interviewed are famous people and others you have never heard of. The director ties them together in a film that is constantly entertaining and thought provoking.

Nygard, who previously directed the entertaining documentary TREKKIES, sets his focus on people's deeply held and widely disparate metaphysical beliefs and makes a film ironic, sad, and amazing, but most of all funny. Without ever taking a stand himself, Nygard shows the breadth and inconsistency of religious belief around the world. This is the best documentary I have seen this year.

Roger Nygard previously made the enthralling documentary TREKKIES, an exploration into the world of super-fans of the Star Trek universe. He managed to make a film that shows that community-- warts and all--without being offensive. His secret shield was that he just looked at the people without being at all judgmental. In a new documentary he uses this same approach to look at people's belief in issues of religion, faith, and metaphysics--issues that countries have gone to war over.

With a light touch he manages to make another charming film that is inoffensive as it covers the diversity of people's attitudes about some of the touchiest questions we face. It is obvious that Nygard knew at the beginning that if he really were looking for the answers to his questions, he would fail. Besides it is more fun to search for truth than to find it. His true intention was to show a broad assortment of belief. Indeed he finds people in the same religion giving contradictory answers to his questions. The director never intrudes himself on his subjects. He is content to just train his camera on people with ideas and opinions and let them represent themselves as best they can.

Then there is wrestler Rob Adonis (founder of Ultimate Christian Wrestling) who tells the gospel interpreted with professional wrestling. Who has the best and clearest answers? My pick would be Chloe Revery, a 7th grader who seems to have things pretty well figured out. The first half very much sticks to religious thought from the United States, but eventually Nygard travels internationally in search of unusual world-views. From the Druids who celebrate at Stonehenge to the Orthodox Jews in Israel, to the pilgrims to the Kumbh Mela in India, which attracts 17,000,000 people, Nygard searches for answers. Much of this is similar to the material of Bill Maher's RELIGULOUS, directed by Larry Charles. But while Maher comes off a little smug as if he has the answers, Nygard takes no stand and shows no bias.

Chloe Revery says it all: "I think truth is what we are all searching for, isn't it? Even though sometimes it is more fun to search than to actually find it." That is really what this film is all about. It is the fun search for a truth we know we will never find. But we want to go along for the ride. This is a nice small documentary that is a pleasure. (M. R. Leeper, RottenTomatoes)

The Nature of Existence