Nine animated shorts from around the world 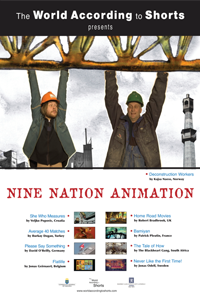 A cat and a mouse carry on a dysfunctional relationship in a futuristic landscape. A Chinese monk sets out on foot with a tiger during the Tang dynasty and happens upon the giant Buddhas of Bamiyan. Two bluecollar workers dissect the meaning of "normal" life, as the world crumbles around them. A box of matches succumb, to their detriment, to the appeal of a cigarette. Four people recount their various encounters—triumphant or terrifying, euphoric or down-to-earth--with an unforgettable rite of passage.

The World According to Shorts presents a selection of recent award-winning animated short films from the world’s most renowned festivals, including Cannes, Berlin, Annecy, Clermont-Ferrand and others.

In celebration of Arts & Culture Week all C.U. Boulder students with a valid I.D. get in free!