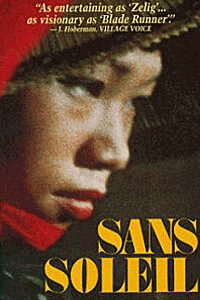 Made by the maverick French director Chris Marker, whose "La Jetée" inspired "12 Monkeys", "Sans Soleil" (Sunless) is an idiosyncratic meditation on time and place, and memory and image in our post-modern universe.

An unnamed woman (Stewart) reads out past letters from a fictional (and unseen) cameraman, whose miscellaneous footage (some shot by Marker's photographer friends), along with archive clips and synthesised video sequences, forms an edited "report from another world".

Hopping between diverse places in Africa, Japan, San Francisco, Guinea-Bissau, Iceland, and the Cape Verde islands, "Sans Soleil" is structured around opposites and juxtapositions: First and Third Worlds, happiness and sorrow, stillness and motion, present and past, fantasy and "reality".

Exploring Japanese society, Marker avoids the familiar concentration on that country's economic miracle and instead records commemorative ceremonies, be they for the souls of departed pets, or for civilians who died in World War Two.

And he cuts between the faces of sleeping Tokyo commuters and Japanese sex, horror and samurai films, to illustrate his idea of the city as a collective dream.

There's even an inquiry into Hitchcock' "Vertigo" and its recurrent spiral motifs, because for Marker it's the only film "capable of portraying impossible, insane memory".

You're unlikely to encounter any piece of film-making this year which is both as cerebrally challenging and as formally adventurous as "Sans Soleil": arguably it's too rich, complex, and elusive to be digested on a single viewing.

Puzzled by its strange rhythms, its kaleidoscopic imagery and its philosophical aphorisms, you'll perhaps want to head back to the beginning and start the journey all over again.

Incidentally this is a new print of the French-language version of "Sans Soleil", complete with English subtitles. (T. Dawson, BBC)