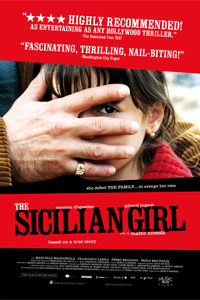 Marco Amenta, with a background as a photojournalist and documentary filmmaker, certainly brings valuable realistic elements to this fictional take on true events of the 1980s and ’90s that pitted a 17-year-old girl and prosecuting judge against the Mafiosi in her small village responsible for the deaths of her father and brother, Mafia members themselves.

While the tidily propelled story of The Sicilian Girl holds interest, it is young star Veronica D’Agostino, with her furious Anna Magnani-like intensity as tormented teen Rita Mancusa, that provides the pulse to this otherwise routine crime drama. The film’s main appeal lies with art-house fans and those familiar with veteran French star Gérard Jugnot (Paris 36, The Chorus), who plays the judge.

Amenta’s story begins in 1985 in a small Sicilian village where seven-year-old Rita, who adores her seemingly kind Mafia father Don Michele (Marcello Mazzarella) and older brother Carmelo (Camelo Garlati), records her observations, including many murders, in a diary. While Don Michele cares for peasants threatened with eviction by greedy Mafia landlords, he emerges over the next few years in the crosshairs of violent mob boss rival Don Salvo (Mario Pupella), who embraces the drug trade.

Rita prefers to see her father and brother as above such nefarious Mafia businesses, but it becomes clear they were no saints. Eventually, both become Don Salvo’s victims. First her father is murdered, followed by the discovery years later of her brother’s corpse in the harbor.

Overcome with grief and a compulsion to avenge so many crimes, the now-teenage Rita runs away from home to embark upon what she calls a “personal vendetta.” At first resistant to the prosecuting judge who will handle the case, Rita decides to cooperate after he accidentally discovers the diary she has been keeping.

Now in Rome in a witness-protection program, Rita is stripped of her identity. She leads a terribly lonely and paranoid existence, except for the friendship she forges with Lorenzo (Primo Reggiani), who works for the Judge.

Ready to expose Don Salvo’s crimes by sharing her diary entries with the authorities and even testifying, Rita cannot escape her tortured mental state. She is hardly soothed by her harsh, dismissive mother Rosa (Lucia Sardo), who viciously tells the daughter that she wanted to abort her. Nor does Rita’s love for childhood friend Vito (Francesco Casisa), whose loyalties tilt towards nemesis Don Salvo, ease her emotional troubles, although his affection for her continues through the years.

At the trial in Palermo, where suspected Mafiosi, including Don Salvo, watch from behind bars, Rita spills all. Her testimony leads to convictions, but they come with a terrible price.

Production values are all fine, but it is D’Agostino’s fiery performance that makes The Sicilian Girl worth the detour.