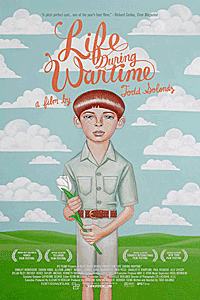 For anyone who finds the films of Todd Solondz, like “Happiness” and “Welcome to the Dollhouse,” too acidic on the tongue, his new work, “Life During Wartime,” is to be recommended. Not that it’s an antidote; Solondz will never be meek and mild, and there are spasms of shame and awkwardness here that will make even devoted viewers wince as sharply as ever. But the movie, his best to date, and a sequel of sorts to “Happiness,” feels drenched in an unfamiliar sadness, as his characters feel the past surging in upon them and the hopes of the future receding before their gaze. “Down here it’s easy to forget everything,” Trish (Allison Janney) says, of her existence in Florida, but she’s kidding herself; nothing, in Solondz’s world, is harder than forgetting, except the will to forgive.

Trish has the best of intentions when she lies. Her former husband, Bill (Ciarán Hinds), was jailed for pedophilia, and she told her younger children that their father was dead, although their older brother, now at college in Oregon, knows the facts. At the start of the story, Bill is released. One look at him—those long, graven features and the prison-cropped hair above—and you see every millimetre of remorse, self-execration, and, worst of all, an undying compulsion to sin. It’s a dauntless performance by Hinds (and some compensation for his oddly curtailed role as a second-in-command to Daniel Day-Lewis in “There Will Be Blood”), and it peaks with a formidable scene in a hotel bar, both a pastiche and a deepening of nineteen-forties noir, where Bill is propositioned by a low-lidded vamp (Charlotte Rampling) whose regard for humanity is even baser than his. Later, after sex, she watches him steal her cash, and says, “I understand. It was hard work. I’m old.” Her words are a punch in the gut.

In a way, the scene interrupts the movie’s main business, which is, this being Solondz, the everyday hostilities of the family. (Thus the title.) Trish has two sisters, one of whom, the miserable Joy (Shirley Henderson), is plagued by a pair of men, or by the memory of them—they come and go like ghosts. Then, there is Helen (Ally Sheedy), who has decamped to California, and who is too much a target for snickering satire—Solondz’s least effective weapon—to make an impression. Trish herself is hoping to be married again, this time to the corpulent Harvey (Michael Lerner), whom she admires wholeheartedly for not being what she calls “sicko pervy.” Janney’s upbeat, quick-smiling lilt is quite heartbreaking, the ideal counterweight to Hinds’s sorrow. They never meet in the movie, I regret to say, yet what binds them together is the light; most of “Life During Wartime” is set in Florida (nicely played by Puerto Rico, it turns out), and Ed Lachman’s photography serves up a hot, unsettling brew of yellow and orange. We see it everywhere, from Trish’s halter-neck dress to the façades of hotels and the lamplight beside a bed, and it distills the entire film—sour and strong, touched with the warmth of the Sunshine State, and licked by the fires of Hell.