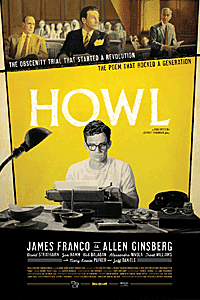 BONUS SHORT TO PRECEDE FEATURE
PULL MY DAISY – rare 16mm short film (30 mins.) directed by Robert Frank and Alfred Leslie, written and narrated by Jack Kerouac and starring Allen Ginsberg – will screen at IFS at 6:30pm (before the 7pm screening of HOWL) and then again at 10:30pm (after the 9pm screening of HOWL) on both Thursday and Friday, October 21 & 22, in the Muenzinger Auditorium.

Howl, at its core, is about the pursuit of honesty through poetic excellence. Of course, it's about much more than that, gay rights, obscenity, the creative process as a whole. But the core of the work? I'm sticking with my honesty/excellence corollary.

James Franco is Allen Ginsberg, famous Beat poet, and he's damn good throughout as such. The film is a rectangle of sorts, following the courtroom drama of the "Howl" obscenity case, Ginsberg's explanation of the poem, Ginsberg's reading of the poem, and finally an animated journey through the imagery of the poem itself. Franco is only in about a third of the film -- the portion culled together from archived interview footage -- but Ginsberg's presence (and genius) looms over the entire film. The courtroom drama is probably the most accessible of the work, and for those with no interest in the creative process I'm assuming they'll find some intellectual rest there. The animation is the most dynamic, if mentally straining segment, but it's invaluable for setting the tone, making Ginsberg's work soar.

Ginsberg's relentless quest was to write the way he was in reality, while pursuing the freedom to be intellectually honest. He palled around with Jack Kerouac, he wrote with relentless fervor, he hit on straight guys. Allen Ginsburg pushed the boundaries of acceptable art, and in doing so he established a safe place for previously "off-limits" literature. Which, when you think about it, is pretty much what art is all about: pushing the boundaries, offending the average, seeking to destroy the rote, all while expanding the collective consciousness. I can't explain what Ginsberg's "Howl" means to me, any more than you can explain the way a fireplace feels on a cold winter night. You can say "warm" all night long, but that word will never touch the place in your heart or soul that's actually feeling it. You'll never get depth out of "warm" no matter how you inflect it. "Warm" is inadequate, as words are inadequate, but Ginsberg's odd and mystical mastery of the math of language allows his work to explore the parts of your brain you didn't even know were there.

And so, Howl is very, very, good. Worth seeing if you love writing, if you've ever written, if you're intrigued by the creative process as a whole. No, Howl isn't always an easy movie, and you'll feel queasy or slightly uncomfortable when Ginsberg ratchets up his verbal barrage on your senses. Still, by focusing on the brilliance of the man's work, Howl has captured a moment in time and effectively translated a literary masterpiece to the big screen. James Franco is excellent and the film flows. Like the jazz musicians Ginsberg's poetry owed tempo to, this one hits all the right notes.