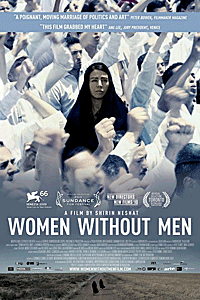 There has been no shortage of powerful films about the condition of women in the Muslim world. Such films as 2003's "Osama" and 2008's "The Stoning of Soraya M." paint a bleak and infuriating picture of cultural conventions that are blind to the humanity of half of humanity.

But there's something in all these films that feels hortatory, as if they were made to persuade us to political action: It's the message that ultimately counts, not the movie.

"Women Without Men" is different. Not that it paints a rosy picture of the lot of Iranian women, but instead of declamation, there is poetry. It isn't carefully argued but, rather, it seduces us with imagery and metaphor.

Made by the Iranian-American exile team of Shirin Neshat and Shoja Azari from a 1990 novel by Shahrnush Parsipur, it follows four Iranian women to an overgrown orchard that one of them has bought and turned into a private sanctuary to escape the predations and oppression of men.

Every frame of the film seems carefully composed, as if it were a painting to stand on its own, and color has been jiggered, sometimes suppressed, sometimes exaggerated. It moves at the pace of a dream. Elements of magical realism keep the story from becoming literal: We have to read this as a poem, not a novel.

The result is that the movie has become universalized: Instead of a political tract about Iran, it becomes a meditation on the contrasting worlds of men and women.

The men live in a world of rules and injunction. Everything they say or do is dictated by outward expectation. The world they live in is a world of words. It is a construction. And it severely limits the men, to say nothing of the women under their control.

The women, in contrast, see the words as an unnecessary layer between them and the world. For the women, the essential thing is compassion, for each other and, ultimately, even for the men. Compassion is a direct interaction with the world, not one buffered by any intellectualized and distancing model.

There is a good deal of pain in this world, and compassion is the only pure coin of the realm.

But more important, it means the story isn't a localized tale of injustice but a universal description of two essential ways of interacting with the world.

The film speaks to any of us: You have only to look at cable-TV pundits to see how ideas about the world have replaced the actual world, and how ideology makes us dumb.