Humanity at the edge of apocalypse 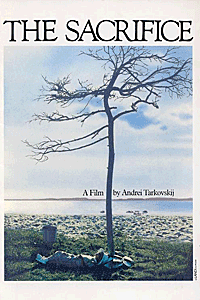 Andrei Tarkovsky's final film, The Sacrifice, is rereleased with a new print to celebrate what would have been the Russian director's 75th year. Impending nuclear annihilation sets the canvas for a dreamlike parable on the emptiness of modern, materialist life. It is a difficult film - slow-paced, unashamedly theatrical and heavily laden with philosophy – yet a profoundly satifying one: a rewarding display of filmmaking mastery that forms a mystical and enigmatic coda to a legendary career.

Alexander (Erland Josephson) is an academic and former actor brooding his way through his 50th birthday. The intellectual mood and the eccentric nature of the characters are set from the first, where the postman interrupts his Zen-inspired lakeside monologue to argue about a character from Nietzsche's Thus Spoke Zarathustra. Alexander's nihilistic despair at the death of spirituality plays out against a compassionate if unconventional family drama, until a shocking television announcement – of imminent nuclear apolcalypse – jolts him into a wrenching bargain with God.

Those familiar with Tarkovsky's Solaris (or even the Soderbergh and Clooney remake) will know what to expect: long, elegaic takes, riven by poetic, fractured dream images; the striking movement of camera and cast; and the glorious use of light and sound. The sheer quality of the cinematic experience is remarkable, although the narrative seems slightly fumbled in amongst the jostling of themes. Alexander, seemingly aware of some coming end, directs much of his wisdom toward his mute son. That Tarkovsky was diagnosed with terminal cancer during the making of the film leaves its dedication – "in hope and confidence" - to his own son all the more powerful.