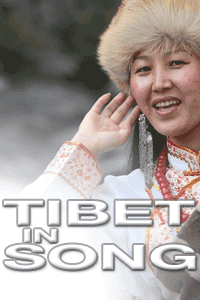 He was at Middlebury College, on a Fulbright scholarship, studying music and video production. In class he’d seen films about the musical traditions of many countries but never one about his own home, Tibet. He decided to check the library and see if any films on the subject even existed but found only a Chinese-made video on Chinese music that included a short three minute sequence on Tibet. He was even more disappointed when he watched the video to discover the segment was nothing more than raw footage of people singing with no explanation or description. It was at that moment that Ngawang Choephel thought “I must do this. I will document the music of Tibet.”

It was not the religious music of the monks, the monotone chanting of prayers or mantras, that intrigued him, instead it was the folk songs, the songs of the regular people, the working songs, the drinking songs, the songs that the average Tibetan seemed to sing while going about each of her various daily tasks, that resonated deeply within him. The songs reconnected him to his distant homeland, a place he hadn’t seen since early childhood.

Like many Tibetans of his generation Ngawang-la, had grown up in exile. He lived with his mother in the tight quarters of a Tibetan refugee camp in Mundgod, India. As a young boy, he and his mother fled Chinese occupied Tibet on foot, trekking across the frigid and foreboding peaks of the Himalayas to India.

In Mundgod, he grew up under the influence of Indian culture. He and his friends would cut school to watch the latest Bollywood films. They all became fans of the Bollywood pop scene but Ngawang-la also began developing a keen interest filmmaking. “I used to watch the credits at the end of the films and wonder what all those people did, what the jobs like best boy and key grip were. I was fascinated with the process of making films,” he recounted.

As a teen, he enrolled in classes at The Tibetan Institute of Performing Arts (TIPA) the premiere exile institute entrusted with the responsibility of preserving and promoting Tibet’s unique tradition of performing arts. It was founded by His Holiness the Dalai Lama in August 1959, four months after his own mountain trek and subsequent arrival in India. It was here at TIPA where Ngawang-la discovered the beauty of Tibetan folk music.

Unlike Bolllywood pop, he felt a deep connection to Tibetan folk music. “It’s not just because I studied at TIPA, that I liked it,” he said, “I could FEEL Tibet through this music. It became very real to me. I stopped listening to Bollywood music. It did not have the same impact on me. That’s because Tibetan folk songs are not just a form of art, they are like a precious treasure hidden under the earth. We learn through these songs everything there is to know about the Tibetan people.”

It was also at TIPA that he found out about the Fulbright opportunity which he applied for and was eventually awarded.

He was determined to use his newly acquired video production skills to document as many performances and explanations of Tibetan folk songs as he could from the older generation of Tibetans still living in Tibet. He arranged passage and began his journey home. He was amazed to discover how willing and excited the local people were to share and perform their songs for his camera.

“When you see and hear the performances of Tibetan folk music you feel the warmth of the Tibetan people,” he says, “These songs have been passed down from generation to generation. They are a historical record of the Tibetan experience.”

He had shot about 20 tapes worth of songs when he was suddenly arrested by Chinese police. His camera and about half his tapes were confiscated (the other half he had already shipped home) and he was swiftly thrown into the back of a non-descript truck. “They didn’t tell me where they were taking me but I knew that I was going to prison,” he said.

He was formally accused of espionage by the Chinese government, denied a lawyer and a trial and forbidden from speaking to the outside world, even his mother. He was sentenced to 18 years and sent to Drapchi prison. Located in the north-east outskirts of Lhasa City, Drapchi Prison is the largest prison in Tibet. It is widely regarded as a major centre of torture and maltreatment, a place where countless prisoners have lost their lives due to excessive abuse. Nawang-la, suffered terrible conditions Drapchi, including weekly interrogations, brutal torture sessions and mental abuse by the guards. What had started as a simple archival project had turned into a nightmare and eventually due to the stoic and persistent outcries of his determined mother, an international incident which would inspire hundreds of protests.

“Tibet In Song” is the film that results from these intertwining storylines. It is both the story of the documented (the Tibetan folk music) and the documentarian (Ngawang Choephel). The film weaves the stories together with a surprisingly refreshing and deftly crafted approach. It unfolds to reveal a transcendent message of hope and endurance amidst a cultural genocide that is currently facing the Tibetan people in China. Ngawang Choephel proves himself a talented filmmaker and an important voice in the Tibetan struggle.

After his release (detailed in the film) he was later accepted into the Sundance labs, where he began to construct his film under the guidance and feedback of professionals and peers. “This was very challenging. There were many opinions to consider but it really helped me discover my own voice as a filmmaker. The labs were very beneficial to me” he said.

On January 24, 2009 “Tibet In Song” was awarded the Special Jury Prize For World Cinema Documentary and Ngawang Choephel became the first Tibetan to win an award at Sundance. I urge you to see this wonderful film, get a taste of the various forms of storytelling from all over the world given voice by the Sundance film festival and to help spread the message of tolerance and freedom for Tibet.