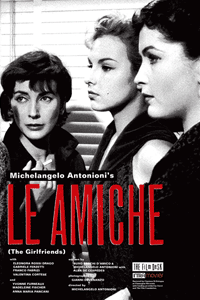 “Le Amiche” — it translates as “The Girlfriends” but sounds so much better in Italian — is about a group of women negotiating the complicated demands of work, love and looking fabulous in a bustling modern city. The city, to dispel any confusion, is Turin, and the sex, since this movie was made in 1955 in a country still ruled by traditional mores, is off-screen and unspoken. And the film, which American audiences may have encountered in revivals and retrospectives but never in theatrical release, was directed by Michelangelo Antonioni.

That name, which once had the power to elicit gasps of admiration and provoke stormy cinephilic arguments, is associated above all with the 1960s. In the early part of that decade, Antonioni (who died three summers ago) made a loosely linked trilogy — “L’Avventura,” “La Notte” and “L’Eclisse” — that embodied something central to both the era’s intellectual sensibility and its visual style. Later, with movies like “Blowup” and “Zabriskie Point,” he would try to capture, with his oblique narrative approach and his ravishing camera sense, some of the energies of rebellious youth culture.

But to encounter him in the earlier phase of his career is to see a slightly different side of this artist. “Le Amiche,” based on a short novel by Cesare Pavese, takes place in a busy and complicated social milieu and dispenses some of the conventional pleasures of melodrama. The characters are neither aristocrats nor neo-realist proletarians or peasants, but rather inhabitants of a world of relative prosperity and privilege. It is not yet “La Dolce Vita,” with its parties and paparazzi, but this life looks pretty sweet.

And also, of course, shot through with longing, ennui and existential anguish. This is evident from the very first scene, in which Clelia (Eleonora Rossi Drago), newly arrived from Rome to set up the local branch of a couture house, prepares to take a bath in her hotel room. This ritual is interrupted by a suicide attempt in the next room, an event that sweeps Clelia into the social swirl surrounding Rosetta (Madeleine Fischer), the unhappy survivor, and her friend Momina (Yvonne Furneaux), a worldly and cynical dynamo.

Rosetta is in love with Lorenzo (Gabriele Ferzetti), a gloomy, unsuccessful artist married to Nene (Valentina Cortese). Momina, who lives apart from her never-seen husband by mutual consent, carries on various flirtations and affairs (mainly with an architect and bon vivant played by Franco Fabrizi), as does her protégé Mariella (Anna Maria Pancani). Clelia, for her part, is smitten with Carlo (Ettore Manni), the architect’s assistant, but is reluctant to act on her feelings. She ascribes some of her hesitance to differences in taste that may also indicate a gap in class status. “We would just fight about furniture,” she tells him.

The passion with which she says it — and the shadowy intensity with which Antonioni shoots their furniture-hunting expedition — is part of what makes this movie so enchanting and strange. It’s not that deep emotions and profound meanings lurk beneath the surface of ordinary actions and encounters. It’s rather that, in Antonioni’s world, the superficial and the profound cannot quite be distinguished. Some of the most affecting scenes in “Le Amiche” depict moments of apparent or intended frivolity. Most memorable is a trip to the beach, where flirtations and make-out sessions seem anything but casual. They seem tragic and absurd, like nearly everything else that happens in this movie, which is often elusive in its meanings and operatic in its effects.

But it is, above all, impossible to stop watching. The expressive elegance of Antonioni’s camera movements — the way he glides around a scene, composing and recomposing the human figures within it to suggest psychological patterns and unacknowledged erotic connections — still has the power to amaze. And his fascination with women is inflected by a sympathy that might be called feminist. The main characters pursue their desires and ambitions under constraints imposed by custom and by the brute impossibility of men. Which is not to say that the women are perfect or that they see themselves as victims. On the contrary, what makes “Le Amiche” so bracing — so sad and, sometimes, so funny — is that its heroines are fallible, flawed, vain and powerful, each in her own way. They often make one another miserable, but their company is always a pleasure.