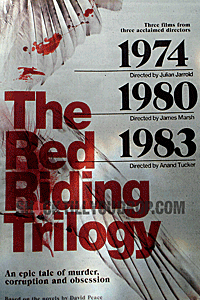 The powerfully disturbing "Red Riding" trilogy will haunt you waking and sleeping, night and day. If you survive the watching of it, that is, which is no easy thing.

It's not the five-hours-plus length of this trio of devastatingly bleak modern British noir films that's daunting. Far from it. Strongly made by three different directors with three different crews but using scripts from the same writer and the same cast for its recurring characters, these films are put together with so much ability and skill that the time simply melts away.

Rather, the hard paradox of this project is that what makes these merciless films at times almost unbearable to watch also makes them frankly impossible to get out of your mind. Not only do they create a gritty, compelling world thick with the fetid air of venality, corruption and desperation, but they also periodically traffic in ghastly and horrific torture, sometimes shown, sometimes merely described, but always circling back to a series of sadistic, soul-destroying murders of women and little girls.

All this and more comes from a quartet of intense, chaotic novels by David Peace ("fictions torn from facts that illuminate the truth," he says) that in turn were inspired by events surrounding northern England's real-life Yorkshire Ripper murders.

While each book was initially supposed to get its own film, budget cuts at British TV giant Channel 4 meant that only three could be made. Each novel is named after a year, but when the film title comes up on-screen, the phrase "In the Year of Our Lord" is added, as if to ironically remind us that we are entering a world where godly behavior is going to be difficult to find.

Though the search for murderers is the engine of Tony Grisoni's driving scripts, that's not what the "Red Riding" films are about. With the meaning or even exactly what's happening in specific moments often intentionally unclear, these are unsettling, multi-layered investigations of character and society, described by the screenwriter as akin to "Dickens on bad acid." In this thoroughly corrupt society, no one is pure enough to cast the first stone, but the drive to end unspeakable evil is still a powerful one, even if it runs through fatally compromised individuals.

These intensely atmospheric pieces are set in Leeds and embedded root and branch in what the films present as the brutal culture of the North of England, where accents are hard to decipher, where the cold -- spiritual as well as physical -- gets in your bones and where the motto of the police is "This is the North, where we do what we want." The "Red Riding" title comes from the Ridings, a trio of administrative areas in Yorkshire, with the addition of red likely calling attention to the violence of the murders and the allusion to the fairy tale, reminding us that young girls were involved.

Separate admission to each installment