I Love You Phillip Morris

DFF at IFS: Jim Carrey stars as sociopathic conman who discovers he is gay 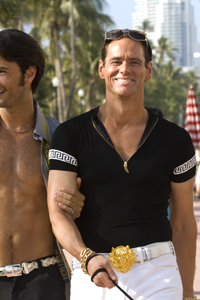 Moviemakers looking to cast the role of a wildly sociopathic conman who discovers in midlife that he is gay might want to give the hyperenergetic chameleon Jim Carrey a call. That's what the brazen writing/directing team of Glenn Ficarra and John Requa (who also wrote the 2003 cult hit Bad Santa) did, and the result is a no-holds-barred comedy—albeit with tragic undertones—about an obsessive poser suddenly forced to confront inner truth.

Based on a true story (and a novel by former Houston Chronicle investigative reporter Steve McVicker), the saga of Steven Russell (Carrey) sweeps us along a dizzying route. As a young man, our protagonist becomes a policeman in Georgia, a church organist, a husband and father. But then a family trauma and a scary car crash turn him around; he migrates to South Beach, takes up a flamboyant gay lifestyle and, to pay the freight, starts kiting checks, manipulating credit cards and running white-collar insurance and bank scams. Caught and sent to prison, he meets his gentle-hearted soulmate, Phillip Morris (Ewan McGregor)—and from there love takes its strange course, complete with detours marked by attempted escapes from prison.

Carrey's rambunctious physical comedy and McGregor's more laidback style make for a perfect match here; the able cast is filled out by Leslie Mann as Carrey's sweet wife and Rodrigo Santoro as his spirited Miami boyfriend.

I Love You Phillip Morris