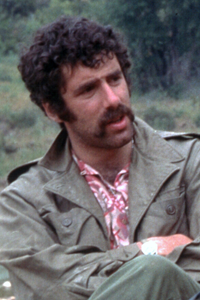 Call M*A*S*H a product of guerrilla filmmaking, and you won’t be far off the mark. In 1969, while the bean-counters and green-lighters at 20th Century Fox had their collective attention focused on two big-budget World War II epics—Patton and Tora! Tora! Tora!—Robert Altman, a TV-trained director with only two feature films to his credit, began shooting a far different war-themed project on a Fox backlot. Right from the start, he opted to maintain a low profile, sticking to a small budget and a limited shooting schedule, in order to make precisely the movie he wanted to make without attracting attention or inviting interference.

Working on his shoestring with a cast of relative unknowns, Altman conducted the production in an audaciously free-form style, encouraging enough improvisation to actually worry some of his more experienced actors—top-billed Donald Sutherland and Elliott Gould both admit they tried to get their director fired—and deliberately allowing visual and verbal anachronisms in his search for something more important than historical accuracy. The result was a bold and bracing black comedy about Army surgeons who crack wise and flout authority to maintain their sanity near the frontline, nominally that of the Korean War. But neither critics nor the viewing public were fooled—because Altman didn’t try to fool them. Sure, he identified the locale through an expositional setup and a few snatches of dialogue. But moviegoers noted the contemporary hairstyles and slanguage. And the more sharp-eyed among them spotted the distinctive conical hats of the local populace—obviously intended to evoke Saigon, not Seoul. At a time when most mainstream Hollywood movies avoided specific references to the then-waging Vietnam War, Altman dared to make a supposed period film that looked and sounded as topical as the morning newspaper or the evening newscast.

Much to the grateful surprise of everyone involved—including the director—audiences in 1970 easily recognized and eagerly embraced what M*A*S*H was really all about. And today—four decades and a few wars later—Altman’s maverick masterwork remains as relevant and as seriously funny as ever.