Executive produced by Tom Shadyac (of I AM) 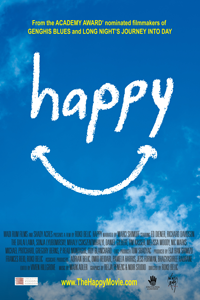 Oscar-nominated director Roko Belic's film shares insights from psychology, neuroscience, and multicultural wisdom to discover the keys to deep and lasting joy in the documentary Happy.

Belic, who shared a 1999 Oscar nomination with his brother Adrian for the musical documentary Genghis Blues, asks why the United States, one of the wealthiest nations in the world, ranks low in happiness. He traveled to 14 countries, interviewing positive and optimistic individuals both rich and poor.

Happiness is 50% genetic, 40% intentional, and only 10% circumstance, according to scientists. This contradicts the widespread belief that attaining wealth and material things guarantees delight. Once our basic human needs are met, researchers say, $50K and $5 million look very much the same to our brains.

Adversity can kick start happiness, giving our brains the biochemical contrast needed to create new, better realities, according to scientists. Melissa Moody recounts her comeback from despair following a truck accident. While recovering from multiple reconstructive facial surgeries, long-buried memories of childhood abuse resurfaced. Her husband left her. She contemplated suicide. Moody hung on for the sake of her children. Today she says she has reached a more centered, happy place. She helps others with physical rehabilitation. She met and married someone new.

The happiest countries promote community. Denmark offers co-housing groups where families share chores and rewards. Anne Bechsgaard, a divorced mother, says she rebounded from depression after moving into co-housing. She and her children enjoy many friends and caring neighbors there. Communal dining has lightened her workload. Bechsgaard cooks supper and cleans up afterwards only twice a month.

A rickshaw driver living in the slums of Kolkata, India, Manoj Singh exudes happiness through arduous work days in extreme heat and monsoons. His family and neighbors are key, he says.

Andy Wimmer, a former West German banker, volunteers at Mother Theresa's Home for the Dying in Calcutta, India. As he moves about the hospice room filled with the destitute, he helps them eat and clean themselves. He feels deep peace knowing he is doing "something more" with his life.

"It's the values we have that are the biggest indicator of our happiness," Belic learns. Intrinsic goals such as compassion, friendship and contributing to one's community are much more conducive to happiness than extrinsic goals like money, power and social standing, he discovered.

Among the experts featured are "Dr. Happiness" Ed Diener, who has studied happiness in America for over 35 years, and Richard Davidson, a neuroscientist at the University of Wisconsin-Madison who studies meditation's effects on individual happiness.

Not for cynics, this decidedly upbeat exploration will appeal most to those who yearn for genuine contentment, and to others who are already happy to some degree.

Like his producer Tom Shadyac (who directed blockbusters such as Bruce Almighty and, more recently, the documentary I Am), Belic sold his home and moved to a trailer on the beach in Malibu. He enjoys surfing and a sense of community, he told Paste Magazine. "Within the first two weeks of moving here, I met more people than I did in 10 years of having a house in the suburbs of San Francisco."

Happy is narrated by Marci Shimoff, author of Chicken Soup for the Woman's Soul.

Happy - A Documentary Trailer from Wadi Rum Films on Vimeo.