Service Entrance (The Women on the 6th Floor) 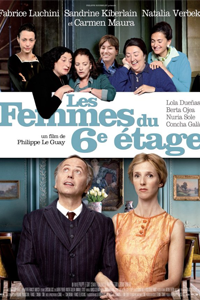 Traditionally promoting French films to English-speaking Americans as a way of cultural exchange between France and America, Colcoa, intentional or otherwise, broadened its appeal to Spanish-speaking American audiences with this film about an investor, Jean-Louis (Fabrice Luchini), who befriends a group of Spanish maids who have fled to Paris from Franco's Spain.

After the death of Jean-Louis's mother, he and his wife, Suzanne (Suzanne Kiberlain), hire Maria (Natalia Verbeke), a newly-arrived Spanish maid who may not be all that she represents (she often has domestic help from her friends). A poor Catholic with some command of the French language, Maria and her fellow docile Spanish compatriots -- with the notable exception of Carmen (Lola DueÃ�Â±as), a staunch lefty -- are considered a refreshing departure from their uppity French counterparts.

Singing, joyful and gregarious, the Spanish women provide an alternative milieu to the conservative one Jean-Louis dwells in and often detests (he is still the boss). Jean-Louis also begins to understand the daily struggles of the working women -- cramped quarters, clogged toilets, domestic abuse, etc., -- and does something about it. Unfortunately, Jean-Louis' benefactor behavior does not stem from any new sense of humanism or noblesse oblige, but rather for his increasing fondness for Maria. Jean-Louis hardly recognized the existence of the other Spanish maids who actually live in his building before Maria came along.

But we all have our cages, and Maria is imprisoned in her own ways, beyond just her low income. Years ago, she gave her son up for adoption, leaving him behind in Spain.

Doing that type of farce the French often do oh so well, Service Entrance maintains a steady beat of humor throughout the film, spicing it up with a little class consciousness and a dose of romance. It is not the best thing to come along in recent French cinema, but the French and Spanish language film's attention to detail and nuance makes for a good time at the cinema and goes further in ColCoa's commitment to cultural awareness between the two countries.

Service Entrance (The Women on the 6th Floor)