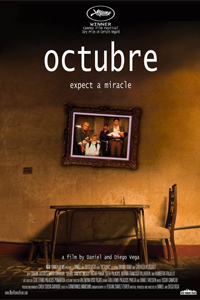 Clemente, the center piece of "Octubre," is a dour, middle-aged loan shark in Lima, Peru, whose only interest besides money is prostitutes.

One day, he returns to his grim apartment to discover someone has left him an infant in a basket. He deduces that the child is the product of one of his liaisons with hookers.

Not exactly fit to be a father, Clemente (Bruno Odar) hires one of his customers, the middle-aged Sofia (Gabriela Velasquez), to look after the infant while he conducts his shady business and searches for the mother.

Sofia becomes attached to the baby and fantasizes about her, the child and Clemente becoming a family. But Clemente, who's unable to form an emotional relationship with another human, resists.

Little happens and little is said in this, the feature debut of the brothers Daniel and Diego Vega.

They throw in two wry subplots, one in which Clemente is given counterfeit money that he's unable to spend; the other involves a homeless man trying to sneak his ill mother out of a hospital.

"Octubre" has the feel of something Jim Jarmusch might have made in his early years -- lots of dark humor that you'll think ofin the middle of the night, and laugh about.