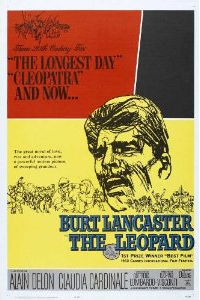 Thanks to the restoration, recut and rerelease of Luchino Visconti's 1963 "The Leopard," we have the sublime satisfaction of a first-time experience with a yesteryear classic. Watching this masterwork (also known by its original Italian-language title, "Il Gattopardo") allows you to return to the filmmaking sensibility of the 1960s, when epics looked like epics, instead of today's computer-generated, merchandise-supporting affairs with digitalized armies and buff twenty-somethings playing grown-up warriors.

It also brings you back to a time when time itself wasn't so frantically edited. Time units in "The Leopard" are longer paced than they are in movies today. You could drive an SUV through the spaces -- physical and temporal -- between these characters. Or so it seems. But then again, the story is about the end of an era, the dissolution of the 19th-century Sicilian nobility. So the outdated expansiveness fits perfectly.

Burt Lancaster, sporting a fat mustache and "speaking" in guttural Italian (he was dubbed), plays Don Fabrizio Corbera, prince of Salina, whose lifestyle is soon to be threatened by the invasion of Italian unification revolutionary Garibaldi.

In one of the movie's awe-inspiring set pieces, we see the extent of Don Fabrizio's world. As draperies flap in an open doorway of his palatial estate, he stands with his extended family at prayer. It's an astounding tableau of family and servants, including his wife, Maria Stella (Rina Morelli), his three grown daughters and son, and family priest Father Pirrone (Romolo Valli).

The ceremony is interrupted by news of a dead soldier lying at the foot of a tree in Don Fabrizio's garden. This is a harbinger of the coming war, which hits home directly. Tancredi Falconeri (Alain Delon), the prince's favorite nephew, decides to join the rebellion. Recognizing the inevitability of change, Don Fabrizio gives Tancredi his blessing and waits with resignation for his world to crumble.

The densely layered story includes Tancredi's battlefield heroics, the family's flight to their country home, and Don Fabrizio's politically savvy campaign to wed Tancredi to Angelica (Claudia Cardinale), the unsophisticated daughter of a wealthy businessman -- this in spite of his own daughter's (Lucilla Morlacchi) love for Tancredi.

The upcoming marriage leads to a glittery celebration, which represents the glorious last hurrah of Don Fabrizio's class. It is also one of the movie's most amazing sequences: a sumptuously costumed and choreographed ballroom affair. The scene reminds us to use the phrase "labor of love" sparingly; to save it for projects like this one, so feverish in its surface detail, and so informed by personal connections. Visconti was not only a cousin to Sicilian Prince Giuseppe di Lampedusa (who wrote the book on which the movie was based), he grew up in an aristocratic family. He was deeply intimate with the life of the privileged. And the movie all but weeps with a sense of emotional loss. Watching it now, a more than 40-year-old evocation of an era now some 150 years in the past, we can still feel his ache from here.