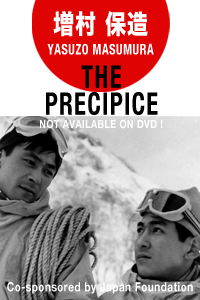 (Hyoheki). In this mountain-climbing adventure set in the snowy Japanese Alps, poetry and death imagery take over, if not subvert, the action. A married woman (popular star Fujiko Yamamoto) is loved by two young men, climbing partners in their better moments. When one of the men falls to his death, the other (Kenji Sugawara) is blamed. (As so often with Masumura, the matter becomes one of industrial intrigue.) Yamamoto portrays Minako as a woman lost between tradition and desire; in the end she doubles as a mother figure both to her industrialist husband (Ken Uehara) and her lover. But where another director might have focused on character, Masumura opts for cinema, and not just in the challenging mountain-climbing scenes. Minako serving tea and cream puffs to the all-knowing husband is a matter of complicated gazes; a Sirkian mirror shot in a garish red and green bedroom echoes the grim cheer of Christmas that haunts this film