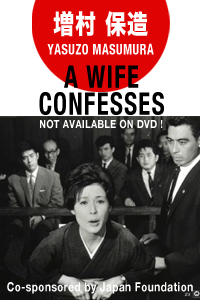 The feature I would identify as Masumura’s supreme masterpiece -– an adroit black and white Cinemascope melodrama, A Wife Confesses -– has no significant parallels that I can discern in the work of Ray, Fuller, Sirk or Tashlin. In fact, confirming the more conventional wisdom that Masumura’s most important affinities were to contemporary European filmmakers, the film shows the direct influence of Alain Resnais’ Hiroshima, mon amour (1959) in its startling uses of match cuts to introduce its successive flashbacks.

A carefully structured and beautifully directed existential thriller, it centers on the murder trial of a twenty-eight year old woman (Wakao) whose husband, an abusive middle-aged college professor, fell to his death after a mountain-climbing mishap led her to cut the rope binding the two of them together. Complicating her split-second decision -– the focus of the entire film -– is the fact that the same rope also attached her at the other end to a young, attractive salesman with whom her husband had business ties and whom she was in love with, and if she failed to cut either man loose, all three would have most likely fallen to their deaths. A powerful metaphor for Japanese interdependence, this rope connecting the members of a romantic triangle is also tied, one might say, to Masumura’s major theme: the tragedy as well as the necessity of individual choice and desire in a highly interactive society.