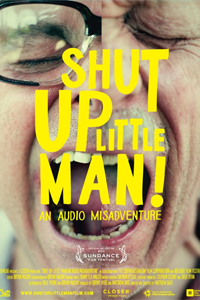 Some time in the mid-90s I had friends who were all excited about some tapes they had. "You gotta hear these two guys Peter and Raymond." What I heard were two drunken men screaming at each other. One of them was noticeably gay, and injected some fine Paul Lynde-esque zingers, the most risible of which was his cri de coeur "shut up, little man!" My friends were doubled-over in laughter; I didn't get it. I dismissed it, though in time I found myself quoting lines from these tapes and, after that, wanting to know more about the two sad sacks abusing one another. (I must note, this is exactly what happened when I first saw the underground film Grey Gardens, which I've now seen dozens of times and recognize as a masterpiece.)

Turns out I was not alone in this reaction. As a New Yorker, I was late to the game, however, as "Peter and Raymond" were cult figures in San Francisco since the late 1980s. The story goes like this: two post-grad dudes (Mitchell D. and Eddie Lee Sausage) move to SF and, in Charles Bukowski T-shirts (really), they rent a shabby apartment. Through thin walls they are subjected to vicious arguments from the neighbors. One night they tape what they hear, ostensibly to present to the cops if there ever are serious problems. These being overeducated wisenheimers, however, they recognize that their peer group would probably get a kick out of hearing some of this stuff. Forget rhapsodizing about beatniks, listening to Tom Waits or reading prose at the City Lights Books - these are actual lowlives - and they are hysterical!

The tapes are a hit. They spread among pre-Internet traders and inspire comics artists like Daniel Clowes, playwrights, animators, even John Zorn, even members of Devo. In time, Matador Records puts out a CD. The Pixies' Kim Deal calls it album of the year. Three movie productions are vying to be first out of the gate, which, I bet you can guess, leads to trouble.

Who owns the rights to this material? What of the ethics? Does holding a microphone outside a door differ from recording ambient sound in your home? Is it right to profit off of other peoples' misfortune? Should they get a cut? Why do we want to listen to it anyway?

Shut Up, Little Man! An Audio Misadventure is a remarkable documentary from Australian director Matthew Bate explores these questions and does so in a nimble, visual way. In addition to the usual talking heads, there are artfully designed recreation tableaux, snapshots in shallow focus. We can see the label on the vodka bottle, but not the man slurping inches away on the ratty couch. This subtlety nicely expresses one of the central themes of the film - we can study random moments to the nth degree, but do we ever really know the story behind it?

Shut Up, Little Man! builds to a heartbreaking and, in my opinion, somewhat finger-pointing third act. On the hunt for dollars and/or closure, would-be producers and the original recordists try and track down the notorious subjects. Their trail leads to skid row bars and SRO flophouses fit for DC Comics villains.

Holding out cash and a six-pack like fish to a dolphin raises the exploitation stakes to whole new levels, and watching the reaction of a basement dwelling super-fan hear a late-in-life Peter say his famous catchphrase will make you wonder just what is wrong with humans that we can treat each other this way. It's like this washed-up, alcoholic queen is a band on a greatest hits tour without even knowing he's on stage.

It is easy to sit and judge, but if I, too, weren't desirous of sticking my nose where it didn't belong I wouldn't have liked this movie as much as I did. We're all, in one way or another, that creep in the basement hoping to "hear the line" just one more time.