I Am Secretly an Important Man

Peter Sillen will NOT be attending after all 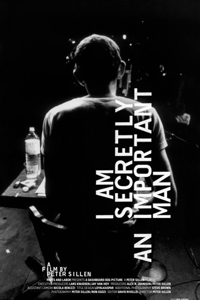 Peter Sillen directed this fine documentary, about the songwriter, performance artist, and poet Jesse Bernstein, and grabbed its title from a poem by Bernstein, "Come Out Tonight," which was a calling card, an inspiration, and an anthem for the burgeoning grunge-rock movement in the Northwest in the late eighties.

Sillen brings together a wealth of video and audio clips of Bernstein along with interviews with the artist's friends, family, and colleagues and striking footage of the beautiful, darker side of Seattle. It's clear early on that the story is not going to end well, given Bernstein's lifelong struggle with mental illness--he died in 1991, at the age of forty--but Sillen finds nobility in the poet's ceaseless commitment to observation, self-examination, and what he called just plain "doing your job."

I Am Secretly an Important Man