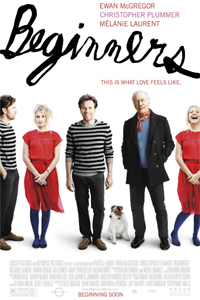 "Beginners" is a delightful film - gentle, playful, creative and ultimately happy - though it's a tricky journey.

Writer and director Mike Mills based the story, of a man whose father declares he's gay late in life, on his own experience. But the characters here are so engaging, and the filmmaking so wonderfully offbeat (Mills also works in graphic design), that the film is far more moving than a straightforward representation of Mills' personal history could be. He pulls out all the stops, with graphic tricks, a disregard for linear time and a dog whose thoughts we can read (by way of subtitles).

In lesser hands, "Beginners" could be affected, false, self-satisfied. Happily, it's not in lesser hands. Mills' confidence comes through, and Ewan McGregor, MÃ©lanie Laurent and Christopher Plummer are tremendous.

Mills begins the film with Oliver (McGregor) cleaning out the home of his father, Hal (Plummer), who has just died. It's a sad, empty place; it's poignant when Oliver flushes bottles of pills. Oliver also adopts Arthur, Hal's Jack Russell terrier, a needy creature who demands that Oliver take him everywhere. Like Oliver, he's hurting.

In voice-over, Oliver tells his parents' story - married in the '50s, a standard life with some hazy hints of unhappiness. Oliver's mother eventually dies and then, a few months later, Hal announces he is gay. He doesn't just announce it, actually, he embraces it, going to marches, dancing in clubs, hosting parties. He meets a younger lover, Andy (Goran Visnjic). Hal is untethered, practically floating, free.

And then he learns he has terminal cancer. (This is no spoiler; the jumps back and forth in time, as with the beginning of the film, make such things meaningless.) It's a cruel diagnosis, but Hal doesn't let it alter his new lease on life; he'll go down dancing.

Meanwhile, after Hal's death, Oliver struggles. Dragging Arthur around, he meets an actress named Anna (Laurent) at a Halloween party. She has laryngitis and can't speak, so she passes him notes: Why is he at a party if he is so sad? The question stuns Oliver, but he can't deny it. Their relationship grows, as Oliver recognizes that he has prevented himself from ever having a truly meaningful relationship with a woman. Mills goes back to show us snippets of Oliver's childhood; Mary Page Keller is fantastic in a small role as his overly dramatic mother. Hal always knew he was gay, he tells his son. He just put off living that way, first out of fear, then out of habit.

Oliver has a great capacity for love. We learn through his relationship with his father and with Anna that he just has a hard time conveying it. The obvious journey in "Beginners" is Hal's, finally able to live his life as he chooses. Plummer inhabits the role with a carefree joy, and infuses it with the weight of his diagnosis. The more difficult journey is Oliver's, adrift and not wanting to be alone. McGregor beautifully portrays his pain and confusion as well as, with Anna's help, his hope.

Mills expertly sends them along their way, and us right along with them.