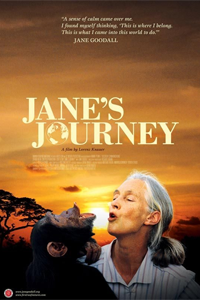 Back in 1960, a naïve 23 year-old woman sailed from London to Kenya with a pencil, a notebook and a playful passion to study chimpanzees in Gombe Stream National Park on the shores of Lake Tanganyika. Jane Goodall had no university degree but, through observation and dedication, she became the most well-known primatologist of our times. Long before Dian Fossey and Birute Galdikas studied gorillas and orangutans, respectively, Jane realized that chimpanzees aren't just capable of using tools, but also of making them -- a discovery that astonished her mentor, paleontologist Louis Leakey. Married twice, then widowed, Jane raised her son, Hugo van Lawick, called 'Grub,' in Africa.

In 1986, after attending a Chicago Academy of Science conference, her life took an abruptly different turn. She went from studying animals to environmental activism to global humanitarianism. Since then, Jane Goodall - now age 77 -- has traveled 300 days a year, lecturing and promoting various conservation endeavors, particularly her" Roots and Shoots" projects which teach young people in 120 countries how to live in peace and harmony with the natural world.

Utilizing archival footage, German documentarian Lorenz Knauer and cinematographer Richard Ladkani trace Jane's early journey from her childhood home in Bournemouth, England -- where her father gave her a toy stuffed monkey named Jubilee -- to her continuing work with chimpanzees in Tanzania. He then follows her around the world as she carries a message of hope. From an overcrowded Congolese refugee camp to Pine Ridge Indian Reservation in South Dakota to melting Greenland glaciers, she stresses her belief that the sustainable future of the planet lies with the children.

Tall, slender, with a gray ponytail and incandescent smile, indefatigable Dr. Goodall is a natural communicator, speaking softly, simply and honestly -- urging everyone to stroke the stuffed monkey she always carries -- and graciously accepting tributes from Angelina Jolie, Pierce Brosnan and the U.N.'s Kofi Annan, among others.

On the Movie Gauge of 1 to 10, "Jane's Journey" is an intriguing, inspirational 8, a beguiling film in every way.