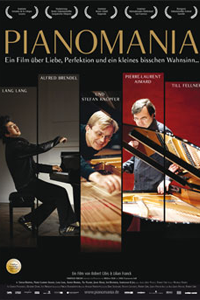 Stefan Knüpfer tunes pianos for Steinway & Sons. I'm underselling him. He's actually a master technician. But a large part of what makes the documentary "Pianomania'' a successful portrait of his skill is that it undersells him, too. If Knüpfer has never modulated the strings of your Steinway or tricked it out, you're like most people, since he works primarily with the best in concert pianism. And if you don't know who he is, it's until about the halfway point that you realize that Knüpfer is much more than the audio equivalent of any mechanic. He's as much an artist as his far more renowned clients.

The film, which Lilian Franck and Robert Cibis directed, merely watches him work in and around the Wiener Konzerthaus (Vienna Concert House). The camera does make its way inside the central nervous system of a few instruments, but it remains committed to observing Knüpfer solve problems, which appears to be the majority of his job. It's a fine filmmaking approach. Knüpfer has a studious air that can turn playful when you -- or a few of his clients -- least expect. The concert-hall stunt-comedy duo Richard Hyung-Ki Joo and Aleksey Igudesman explode with shock at the discovery that Knüpfer might be as good at their jobs as he is at his own.

Collaboration plays into Knüpfer's helpful, obliging air. The film devotes a large portion of its 93 minutes to the year he spends perfecting a piano for the French musician Pierre-Laurent Aimard, who plans to record a series of Bach compositions. It's as painstaking a process as you can imagine. And most of the hard work doesn't begin until the recording sessions are underway.

Knüpfer allows the camera to see both his anxiety and the "eureka!'' moment it produces. But if there's a problem with Franck and Cibis's watchful approach, it's that it might raise too many questions (that title also raises some questions since it implies that Knüpfer's talent is a pathology). When the superstar Lang Lang tells Knüpfer he hears, in the instrument he's using, a lack of "perfect disappearing,'' you wish, just a little, that the movie had built into its structure a way for someone to explain the flaw the pianist perceives. (Never mind that he'll just bang through it, anyway, with his famous Whack-a Mole playing style.) The movie remains perfectly absorbing if you're unfamiliar with the nuances of live sound, much the way a good glass of wine is still good even if, to a layperson, it defies ready description. These are professional kinks and Knüpfer smooths them out professionally.

Part of what he does is probably beyond explanation, anyway. I imagine what makes Knüpfer such a talent is his extrasensory grasp of what each musician needs for each piece and piano. He trusts he can locate that abstract perfect disappearing, and, eventually, so do we.