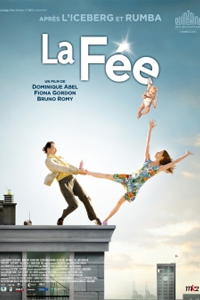 Dom, a hotel night clerk in Le Havre, is chronically late for work because of a broken-down bicycle. One night, after he finally shows up, he makes himself a sandwich and sits down to listen to his favorite recording, "What a Difference a Day Makes." Little does he realize how fortuitous those lyrics will be. After repeated phone interruptions and an altercation with a guest who tries to sneak his dog into the hotel, Dom loses patience with the world--so when Fiona, a sprightly young woman, arrives, he barely notices. A self-proclaimed fairy, she insists on granting him three wishes. Dom asks for a scooter and petrol for life, but never mentions a third.

To his surprise, Fiona grants both wishes and the couple soon becomes inseparable. Throughout a series of madcap adventures--including a skinny dip in the harbor and attempts to smuggle African immigrants in the trunk of a car to England--Dom and Fiona fall in love. But trouble awaits. When Fiona mysteriously vanishes, Dom panics until he finds her confined in a psychiatric hospital. A hilarious rescue scene finds Dom in an outrageous disguise. And somewhere in the midst of all the mayhem, Fiona gives birth to a baby boy.

Influenced by Charlie Chaplin, Buster Keaton, and Jacques Tati, The Fairy uses stylistic art direction to provide a punch line to each gag and a colorful retro feel throughout.