With director Stephen Gyllenhaal in person! 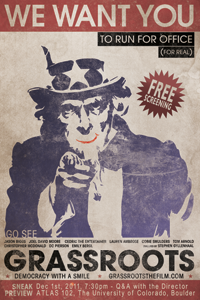 GRASSROOTS. True story. A short-tempered, unemployed music critic who likes to dress as a polar bear thinks he can harness the power of the people to ride the monorail to political victory in Seattle. And he's right. Almost.

It's before Twitter, before the flash mob, before Obama. It's 2001, and political unknown Grant Cogswell decides he must take down Seattle City Councilman Richard McIver. Grant has only one dream, but it's a big one: an elegant monorail gliding silently above the city's wet streets, with only a tiny footprint -- "like a kids' lemonade stand!" -- on the ground. He is apoplectic with rage over McIver's mass transit proposal: a ground rail train he thinks will destroy lower class neighborhoods, wreak environmental harm on the local salmon population, and destroy the city.

Grant has no campaign contributors, a tendency toward outbursts of profanity, and a snowball's chance in hell -- until he lures recently fired alternative-weekly reporter Phil Campbell to run his campaign. Phil may be a political neophyte, but he has the tact that Grant lacks and a 'what- the-hell-I-haven't-got-anything-better-to-do' attitude...until he recruits an army of wild-eyed young volunteers to back their unlikely crusade, and the impossible begins to happen.

GRASSROOTS is a character-driven comedy about the power of the people and the virtues of standing up for what you believe in. Against all odds.

It's politics. But not as usual.