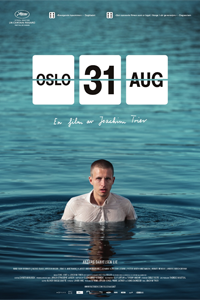 Simple in concept, complex in emotional heft, Oslo, August 31st concentrates on a day in the life of a young man who discovers that overcoming his drug addiction hasn’t brought him even close to happiness, nor has it brought the redemption for past sins he so desperately seeks.

The result is a superb exploration of loss, guilt and regret in Norwegian director Joachim Trier’s often-unpredictable second film.

Anders Danielsen Lie brings power to a low-key performance as the mostly likeable Anders, a quietly intense 34-year-old about to be released from a residential rehab facility. A day pass for a job interview will be the test of 10 months of sobriety. But far from being excited at the prospect, Anders is clumsily trying to drown himself when we first meet him. He is even a failure at that.

Denial is not one of his problems. From a privileged family, Anders is aware he’s blown it. His parents are selling the house to pay his debts, his onetime girlfriend won’t take his calls, his sister doesn’t trust him and his friends have scattered. He’s anxious to make amends, or gain a sense of peace, or something else we can’t quite define — thanks to Trier’s skilled hand — and uses his day on the outside as an opportunity to find people from his past and make amends.

His first stop and the dramatic highlight of the film is his visit to friend Thomas (Hans Olav Brenner), where he finds his old running mate has traded his partying past for a new life with pretty wife Rebekka (Ingrid Olava) and two young children.

At first Thomas makes light of Anders’ addiction while putting down his new domestic world with asinine bravado. But as they spend time together, layers peel away and truths are told. Anders details his failings. Thomas begins to list his disappointments with life and marriage, then tries to encourage his friend with platitudes about future jobs and new beginnings. Anders will have none of it.

Conversations between characters reveal a plot that plays out slowly and deliberately as the audience discovers the damage Anders has done to the people he was once closest to. He takes his punishment stoically. But what we see most often is promise in Anders, a well-spoken, almost gently charismatic sort who once had a burgeoning career as a journalist.

It’s a masterful performance from Lie who commands the camera with an unaffected portrayal of a once-golden boy who deliberately ruined his life. His attempts to make his failings up to people are often slapped aside; his need to connect is misread or pursued in unrealistic ways. A job interview slides off the rails when he’s repeatedly questioned about the gap in his resumé. “I was an addict,” he finally admits in a low voice, growing agitated as he wonders aloud if he should add dealing to his past work history.

As bleak as the subject matter is, Trier doesn’t let that become the central focus of Oslo, August 31st and we aren’t wrong in occasionally thinking that there is hope for Anders. All credit goes to Lie for that as Trier’s camera follows him like a documentarian.

Shot in a realistic way along the streets of Oslo on an early fall day that slides into night and grey early morning, Oslo, August 31st puts a line under the addict’s mantra that sobriety is to be lived one day at a time.