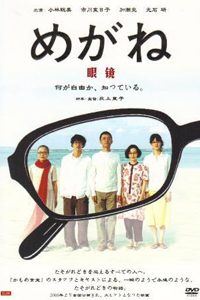 Wearing man-tailored shirts and designer glasses, Taeko (Satomi Kobayashi) drags an armored suitcase down the beach, toward an inn that might be called the Hotel Indifference: Run by Yuji (Ken Mitsuishi), frequented by Haruna (Mikako Ichikawa) and spiritually inspired by the cryptic Sakura (Masako Motai), the place operates like a family home, where Taeko can either enlist or resist.

Awakening to Sakura's smiling face at her bedside each morning, Taeko grows bemused and vaguely irritated by Yuji's unorthodox approach to guest relations. But when she leaves for another hotel -- where the patrons are expected to hoe the vegetable gardens in the morning, and take classes in the evening -- she realizes a kind of homesickness: There's something weird but embracing about a place with nothing to see, and where "twilighting" (evening rumination) is the most exciting entry on the activities menu.

"Glasses" possesses the same clean visuals of Takeshi Kitano ("Hana-Bi"), and the buoyant melancholia of Hirokazu Kore-eda ("After-Life"). It also has the unhurried-bordering-on-static rhythms of Taiwan's Tsai Ming-liang -- which may drive certain caffeine-inspired audiences to rebel. But the point of "Glasses," as embodied by Taeko and the hotel's lack of cell-phone reception, is that slower may be better, and Ogigami infuses her film with so much droll humor and precise observations that the film attains its own particular form of propulsion.

Ogigami, a real find for American auds not familiar with her work, knows that people don't usually change in dramatic, explosive, cinematic ways but in subtle gradations. Via her direction and Kobayashi's finely calibrated performance, there's an intimacy achieved with Taeko's metamorphosis that is rare and exhilarating. Sakura-san, the older lady whose arrival at the inn is anticipated each year like spring -- and whose elaborate shaved-ice creations are a kind of divine nectar -- is a great character, mysterious, benevolent and wise. Her serenity infects those around her, and as she mellows, she actually grows more self-possessed.

While the open beaches of "Glasses," its wild fields of green and uncluttered sky, offer a tangible sense of peace and wry reflection, the acting and extraordinarily confident direction give the film tremendous soul.