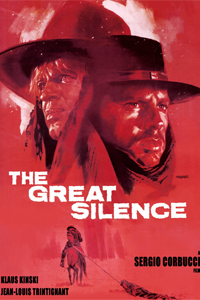 This is arguably erratic spaghetti western Italian filmmaker Sergio Corbucci's ("Django"/"A Professional Gun") best film; it's a bleak and unrelenting bloody actioner that takes no prisoners and feels content with its high body count. It's in the same pasta bowl as the Sergio Leone films, only with even more red sauce. It relishes in the themes of class struggle, the corruption of the law and in violent political revolution, keeping with the turbulent times over the Vietnam War protests going on in America during its filming. Never released in American theaters, only on video and later on DVD, it nevertheless found its niche with a small but appreciative following of hardened cult fans that could handle its tough lessons on law and order and not be squeamish over its bloodbath. Its grim ending has all the good guys dead and most of the bad guys alive, as it shows that one man alone can't fight against the system to make it right--contrary to what most of the other Westerns were spewing out as the American way.

It's set in the Utah Territory (filmed at the Pyrenees) during a snowy winter around the turn of the last century.

The film's hero is a mute gunslinger, who kills only in self-defense, appropriately named Silence (Jean-Louis Trintignant), whose vocal cords have been slashed by a sadistic bounty-hunter when he was a youngster and witnessed his parents gunned down by the bounty hunter working for crooked Snow Hill banker Pollicut (Luigi Pistilli). Since then Silence has hated the bounty hunters who murder and bully the unfortunate under the full protection of the law, and he charges $1,000 to those requiring his services to eliminate the bounty hunters. His M.O. is to force the bounty hunters to draw on him, and he either kills them or shoots off their thumbs. When a group of Mormons have been forced to go into the mountains as unwilling outlaws, forced into stealing for survival by creepy storekeeper/ banker/justice of the peace Pollicut, some hire Silence to protect them from the bounty hunters seeking them out. His rep has grown in the area over time and he's hired to get revenge by the light-skinned Negro Pauline (Vonetta McGee, her film debut), who was recently made a widow when the deranged bounty hunter Loco (Klaus Kinski) and his vulgar partner Charlie gunned down her husband after he threw down his rifle and surrendered. Pauline says "They call him Silence, because wherever he goes, the silence of death follows." Silence eggs Charlie to draw on him and is killed, and he then pursues Loco.

Loco also charges $1,000 for his services, but only uses the law as a cover for his greed and killing: he's a madman who would kill either for money or to get his kicks. Though both claim to work within the law: Loco works for the wealthy and powerful Pollicut to put down the oppressed Mormon renegades, while Silence works for the oppressed to get justice against the powerful.

The governor of the territory is aware of the bounty hunters taking advantage of the law and says in the near future amnesty will come and the outlaws can leave the hills in peace, but until then he sends his top man Burnett (Frank Wolff), the patriotic hero soldier and fast draw, to be the law-abiding sheriff of Snow Hill.

It all builds to one downbeat shootout massacre of at least some twenty people by the guncrazy bounty hunters, as it ends in despair and hopelessness. It follows with a title card pointing out that justice didn't come to the territory until decades afterwards. The feeling that everyone is trapped in this beautiful looking snowbound winter wonderland is superbly captured by the camerawork of cinematographer Silvano Ippolito. Ennio Morricone's haunting score adds to the eerie beauty of this grim film. Except for a few spots in the story where the actions of the men can be questioned as not being real, the western holds up as a hardhitting but unique one that was serious about what it had to say about law and order and the social order.