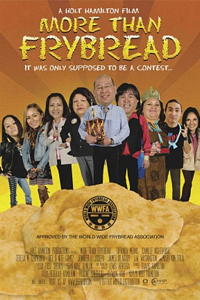 Got a hankering for frybread?

Frybread, a staple in American Indian cuisine, is the subject of an independent film making its debut in the Four Corners this weekend. "More Than Frybread," the latest film from Holt Hamilton Productions, opens Friday at Allen Theaters in Farmington and Gallup.

The 96-minute film tells the fictional story of the first Arizona Frybread Championship, which pits contestants from the 22 American Indian tribes in Arizona against each other.

The film closely follows contestants from five tribes: Navajo, Hopi, Yavapai-Apache, Hualapai and Tohono O'odham. The contest is based in Flagstaff, Ariz.

The winner of the contest will go on compete for the national championship, followed by a competition to discover the best frybread in the world. "More than Frybread" just covers the Arizona competition.

The cast includes well-known native actors and comedians, as well as a fair share of "raw talent," said actress Camille Nighthorse, of Phoenix.

Nighthorse, an enrolled member of the Hualapai tribe, started her career in film in 1995. This is her first lead role, she said during a phone interview Wednesday. She plays contestant Sammie Powskey in the frybread competition.

"I think we have great characters, funny characters," Nighthorse said of the movie. "We have four or five that are regular stand-up comedians."

The plot is believable, although the frybread competition is fictional, Nighthorse said. Many American Indian tribes make frybread with flour, salt, lard and baking powder, or experiment with other recipes.

"I grew up with frybread," she said. "Each tribe claims it to be their own. The competition is believable, too. It's stuff that you see on the reservation, people looking at each other with the evil eye, getting competitive. That's when it gets really funny."

"More than Frybread" is the fourth native film to come from Hamilton, an independent filmmaker who worked with a budget of "well under $100,000" to bring frybread to the big screen.

Hamilton made his debut in the native film industry in 2007 with "Turquoise Rose," a movie about an urban Navajo girl returning to the reservation to care for her mother. Hamilton followed that movie with three more: "Blue Gap Boy'z" in 2008, "Pete & Cleo" in 2009 and this year's "More than Frybread."

Hamilton's crew shot "More than Frybread" in 12 days in locations on five reservations. They shot the Navajo portion in Kayenta, Ariz.

"We're just a little independent film trying to make it," Hamilton said. "Native film is still a small market, but we're getting lots of good response."

Hamilton, 34, began filming on the Navajo Nation and surrounding areas after serving a mission on the Nation for the Church of Jesus Christ of Latter-day Saints. He began writing scripts for native films while stationed in Iraq with the National Guard.

One of Hamilton's goals in native film is to introduce native talent to the big screen. More than 60 actors have speaking roles in "More than Frybread."

Another goal is to raise awareness of native life and humor, he said. When he produces independent films, it opens the door for him to show them on other American Indian reservations.

This week, Hamilton finished a 15-day road trip during which he showed the film in locations on 10 reservations in six states.

"It's a comedy, a mockumentary," Hamilton said of the movie. "We've had people tell us, coming out of the theater, that their faces hurt from laughing nonstop. It's a film that makes people laugh the whole time."