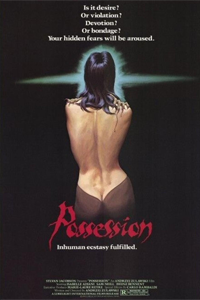 On the surface, the story is as follows: Mark (Sam Neill) returns from some sort of espionage escapade abroad, gives a report about "the man in pink socks" to his superiors, then goes home to his wife and child, only to find that the missus has not exactly been lonesome without him. Anna (Isabelle Adjani) wants a divorce and although she will not initially reveal why, super spy Mark hires a private detective who quickly tracks the usurping provocateur down. Mark goes to the flat forthwith has it out with him, but lover Heinrich (Heinz Bennent) doesn't go down without a fight and in fact makes short work of Mark, who slinks out and goes back to alternately confront his wife and plead with her to stay. She will not. In fact, she will do anything — even kill — to be free of her oppressive domesticity.

That's the basic upshot, but it means nothing, really. Possession is an out-there, surreal, overwrought, hysterical and Kafkaesque, bizarre exercise in obsession and insanity. To try and explain those aspects of it (especially Anna's aborted, squid-like man/child with whom she commits murder and creates yet other new and strange life-forms) would be an exercise in futility. Possession is truly a "you had to be there" kind of movie. See it for yourself  and I guarantee, love it or loathe it, you'll never forget it.

When it comes to the sheer artistry of filmmaking, it's an astounding, jaw-dropping feat of furious beauty. In one early scene, where Mark is giving his report his bosses, the camera weaves, bobs, swoops and dances like a gliding ballerina (mirroring Anna's own profession in the film). The characters are in constant motion, like caged animals in some moments; like escapees running free for the first time in years, in others. DP Bruno Nuytten follows their every move. In one scene, in which Mark and Anna are having a discussion, he rocks back and forth in a chair, with attention shifting from her face to his, surely making the focus-puller sweat bullets on that day. What's more, there are amazing long shots in tunnels, through corridors, up and down stairways, and plummeting over metaphorical cliffs.

When it comes to the horror aspects, open-minded genre fans will not be disappointed. Practical effects include "the creature" (by artist Carlo Rambaldi, who'd worked on Ridley Scott's Alien prior) — much improved on 35mm, having seen it before only on VHS and degenerated DVD copies. And blood. Goo, too. Lots of both. Murder, mayhem. Diabolical doppelgangers. The 'yikes' factor is all there, in addition to the raw, scary emotion and unusual, suspenseful plot twists.