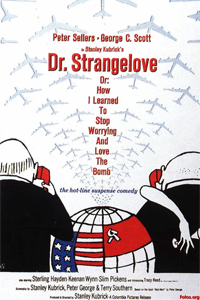 Dr. Strangelove or: How I Learned to Stop Worrying and Love the Bomb” certainly isn’t the most popular of Stanley Kubrick’s films. In fact, it ranks well below “The Shining,” “A Clockwork Orange” and “2001: A Space Odyssey” in terms of sheer notoriety, but while the movie may not be as well known among the general populous, it’s easily one of the director’s best films of his somewhat controversial career. That’s saying a lot when you consider his catalog also includes “Full Metal Jacket,” “Lolita,” and my personal favorite, “The Killing,” but when a political satire about the Cold War is just as funny and relevant as it was 45 years ago, it’s difficult to argue otherwise.

Based on Peter George’s Cold War thriller novel, “Red Alert,” the film opens with paranoid U.S. Air Force General Jack D. Ripper (Sterling Hayden) delivering an executive order to a fleet of B52 bombers to attack Mother Russia. While British Group Captain Lionel Mandrake (Peter Sellers) attempts to talk Ripper down from his maniacal plan, U.S. President Merkin Muffley (Sellers, again) meets with his team of advisors – including the strongly opinionated General Buck Turgidson (George C. Scott) and the quirky ex-Nazi scientist Dr. Strangelove (Sellers, once more) – to discuss the options, only to learn from the visiting Russian ambassador (Peter Bull) that the Soviet Union has created a doomsday device that will automatically trigger its own nuclear retaliation upon impact.

“Dr. Strangelove” is the kind of film that you know how is going to end from the word go, but that’s not exactly spoiling much. Though the original source material is a straight-up political thriller, exposing the black comedy of the situation makes for a more engaging story. It’s been well documented that Kubrick didn’t realize this until he actually tried to adapt the novel as it was written, but it’s a good thing that he did, or “Dr. Strangelove” might have gone down as the director’s worst movie instead of his best. By structuring the film as a comedy, he takes a series of events that would normally seem absurd and drives them so far over the top that they end up feeling more realistic as a result.

Though the style of humor is far from subtle, it’s still pretty clever. At the top of that list is the scene where the President informs the Russian Premier of the accidental attack – by far one of the funniest one-sided conversations ever recorded on film. Credit goes to Peter Sellers for the hilariously candid moment (after all, he improvised a majority of his lines), and though most actors would buckle under the pressure of playing three different roles, he positively thrives on it. While Sellers is best remembered as the madcap title character, however, he actually generates more laughs as the more reserved Captain Mandrake and President Muffley. Meanwhile, co-star George C. Scott (munching on an ever-growing wad of gum) literally chews up scenery as the Commie-hating General Turgidson who, apart from delivering some of the film’s best dialogue, serves as the perfect foil to Seller’s straight-laced politico. The duo's scenes together in the War Room are probably the biggest reason why the movie works as well as it does.

Also noteworthy is Slim Pickens as the gung-ho redneck pilot, Major T.J. “King” Kong (a role originally intended for Sellers), and a young James Earl Jones in his feature film debut. Of course, the main allure of “Dr. Strangelove” is the script itself, because no matter how brilliant the performances may be, it’s the idea of interpreting such deadly serious material as satire that makes it funny. Granted, there’s nothing particularly about the film that will make you laugh out loud (at least, not the first time you see it), but that’s because you’re not sure if you should laugh. That’s undoubtedly what Kubrick was trying to achieve when he made “Dr. Strangelove,” but the fact that it yields the same reaction half a century later is what differentiates a masterpiece from a classic.