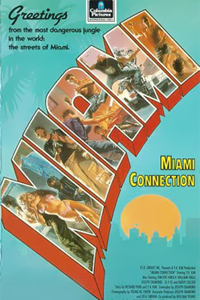 If you grew up in the US in the 1980s, escaping exposure to the television series MIAMI VICE was pretty damn hard.  The adventures of Crocket (Don Johnson) and Tubbs (Philip Michael Thomas) set standards – for better or worse – in both the entertainment and lay person fashion industry.  People were showing up to work with 5 day stubble on purpose after, no doubt, spending a weekend jamming to Jan Hammer’s MIAMI VICE theme in the clubs.  While too young to fully indulge in the MIAMI VICE inspired nightlife, I am eternally grateful to the show for inspiring the team behind the glorious NINJA TURE (1985) to make the equally glorious MIAMI CONNECTION (1987). It is the kind of cinema we live for here at Video Junkie – a film full of some many laughable “holeeeeey shit!” moments that it easily secured a spot on our “best film EVER” lists.

MIAMI CONNECTION opens with a big cocaine deal going down that is interrupted by some ninjas who ride around on loud motorcycles.  Hmmmm, I don’t think they know how ninjas are supposed to act.  Anyway, ninja leader Yashito (Si Y Jo) takes his haul to a club to sell to epically bearded Jeff (William Eagle, if that is your real name).  Jeff, however, gets perturbed when Dragon Sound – the club’s house band offering “the new dimension in rock and roll” – takes the stage.  Seems his sister Jane (Kathy Collier) has joined the band and, oh lordy, she kisses band member John (Vincent Hirsh) on stage, which makes Jeff angry and uneasy.  Think about that for a second.  A guy who is in a club to conduct a major cocaine deal is pissed his sister is in a band and kissing a guy.  That about sums up the craziness on display here in MIAMI CONNECTION.

Jane and John meet up on the campus of the University of Central Florida while she is in her computer class.  Here is another classic bit that had me rolling – the computer teacher asks the class to applaud the University’s computer team for coming in fourth place in an international programming contest.  What?  Do these filmmakers know they control the product onscreen?  What is to prevent them from putting the University in first place?  Talk about aiming low. Anyway, our lovebirds walk around the campus and Jane tells John about her overprotective brother who hangs around with shady people.  Oh damn, guess who just rolled up in his red convertible with a whole group of shady looking people?  Jeff decks John while Jane watches helplessly (that sounds like a nurse rhyme).  The boys from Dragon Sound show up to offer their boy some support and, when they drive away, John says, “If Jane wasn’t there I would have kicked his ass.”  Yeah, sure, pal.

Meanwhile, the band that Dragon Sound apparently replaced is pissed and shows up at the club to demand their jobs back.  Not a good move as the club owner apparently knows martial arts too and beats down the group.  The causes the scorned singer to contact Jeff about getting rid of Dragon Sound, a task the begrudged brother is more than up for. After this is where one of my favorite bits of the film happens.  Jim (Maurice Smith, who may or may not be the MMA and kickboxing legend) tells Mark (Y.K. Kim) and his other band mates that he has been looking for his father.  Here’s how it breaks to them in the movie.  Keep in mind this is the very first time the film ever mentions all five of the band members are orphans.

Of course, abandonment issues are the least of Dragon Sound’s worries now as they are confronted by the other band with a gang of thugs in the middle of the street.  Mark tries to soothe the scene by saying, “Listen to me. I don’t want any trouble. I get the job from agent. Don’t bother us.”  That goes over real well (perhaps they didn’t understand Mark’s thiiiiick accent?) and soon a huge brawl breaks out over the streets.  Naturally, since Dragon Sound are also Tae Kwon Do experts (did I forget to mention that?), they whoop everyone’s ass and Jeff is forced to resort to kidnapping.  His gang snatches Tom (Angelo Janotti) from Dragon Sound (rule #1 in music industry kidnappings: always go for the John Oates look-a-like).  This results in a showdown at an abandoned warehouse, which culminates in gang leader Jeff being killed.  For some reason Jane doesn’t seem to care much, but Yashito takes this shit real personal when he hears his “brother” (what?) has been killed.  He and his ninjas suit up to get rid of Dragon Sound once and for all.  The ninjas confront them in broad daylight and their timing couldn’t have been worse as they were just driving Jim to the airport to meet his long-lost father.  Someone will have to pay.

You also have to love the completely random shifts in tone.  Like Park’s NINJA TURF and AMERICAN CHINATOWN, things can go from jokey to serious and vice versa in a split second.  There is a great bit where a ninja underling tells Yashito about the final attack.  His response is to cut off the head of bearer of bad news and then laugh maniacally.  And I love the dudes they find to be in the gangs in these films.  We get all shapes and sizes, from the rotund to the rail thin Kid Rock look-a-like.  Their depiction of US gangs is so bad that I’d almost thought this was a Hong Kong film.  Oh damn, did I forget to mention that Dragon Sound plays several songs?  They pepper such hits as “Friends” (lyrics: "Friends through eternity, loyalty, honesty/We'll stay together through thick or thin/Friends forever, we’ll be together/We're on top because we plan to win.") with an on stage display of bad martial arts.

So MIAMI CONNECTION is pretty much a blast from start to finish of its 83 minute running time.  It is a shame that Park only made a few of these movies.  Seriously, if I had the $250 million dollar budget of a TRANSFORMERS film, I’d spend $249 million on a time machine just so I could go back to the 1980s and give director Richard Park a million dollars to make a couple more action movies.  Oh, and I’d totally go to the club with my stubble and neon t-shirt under a white sport coat to scope on the 80s chicks.