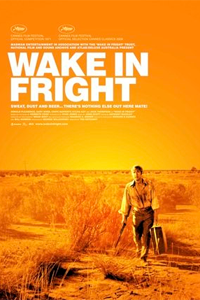 No mere curiosity from 1970, Wake In Fright is a riveting film with exceptional relevance today in its cultural veracity and its observation of not just outback Australian society (if you can call it that) - but in human nature. And no wonder, since it comes from a novel that was based on the real life experiences of an Aussie journo, Kenneth Cook. Nor is it surprising that the film was screened in Competition in Cannes (1971) where it was screened again in the Cannes Classics sidebar in 2009.

What's great about the film is the recognisably real flip-flop intensity and humour, the characters and the isolation that forges its inhabitants like a blacksmith forges and shapes and bends hot steel. Gary Bond, reminiscent here of Peter O'Toole in his Lawrence days, is a hapless young teacher who is posted to a settlement the size of two buildings. A pub on one side of the railway tracks and the small school house on the other, catering to a dozen or so local kids. When school holidays finally arrive, he heads straight towards Sydney and his girlfriend. He doesn't get past Bundayabba, a small town that is not dissimilar to Broken Hill (38 years ago).

Ted Kotcheff has directed a minor masterpiece - and that's not meant to be disparaging; through the relatively simple story of a young man's hard living adventures over a few days, he has found a rich source of observation. He serves it up with an emotional payload, and a driving force that leaves no room for judgement. The characters are complex and unpredictable, even when they are behaving badly, which is pretty much all the time. And yet, however unconventional, these characters are by and large genuine Aussies - and genuine.

Kotcheff orchestrates some remarkable scenes, ranging from an extensive and pivotal two-up game in the pub, to a kangaroo hunt, a singular would-be sex scene (you'll have to see it to understand), to a brawling, drinking party .... and the climactic sequence.

The iconic cast includes Chips Rafferty in his last role, as the town cop, Jack Thompson in his first role, as a hard drinking, rowdy local lad, John Meillon in a cameo as the publican of the tiniest and emptiest pub I've ever seen, Maggie Dence as the unforgettable motel receptionist, Donald Pleasence as the alcoholic dropout doctor, and Sylvia Kay as the dutiful daughter whose modest exterior hides a ferocious secret.

It's a rare pleasure to revisit this Australian classic, which has been spectacularly restored after an agonising search around the world by its editor, Anthony Buckley; great job, Tony and thanks to Atlab and the National Film and Sound Archive. A genuine gem.