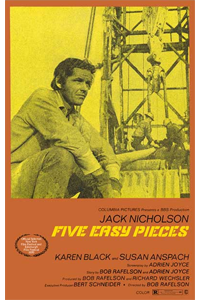 One might say he was one of the original video music directors, one who managed to parlay his success on the small screen into one of the most important films of 1970. Bob Rafelson began his work as a director on the '60s TV show The Monkees, a variety shows whose events were set to music weekly, each telling a story to one of the band's many catchy songs. His first foray onto the silver screen was in the commercial flop of Head, a Beatles-influenced Monkees big screen effort that made a measly $750,000 at the box office.

It was his next film two years later that proved he had what it took to be a great director. Earning two Oscar nominations as for Best Picture and Best Original Screenplay, Rafelson's Five Easy Pieces showcased his admiration for the New Wave and was one of several directors of the period who did so. Unlike films like Bonnie and Clyde, Five Easy Pieces captured the more austere aspects of the movement keeping the settings and costumes limited to its modern trappings and introduction random characters whose purpose is to educate the audience of liberal philosophies without directly drawing the concepts from his primary actors.

Jack Nicholson plays Robert Dupea, an oil field roustabout who has let his talent and potential slip away in an effort to live a peaceful and simplistic life away from his wealthy family. When his sister (Lois Smith) informs him that their father is dying, he brings his pregnant, uneducated girlfriend (Karen Black) with him to his family's estate in order to be with him. His arrival at his birth home doesn't come until the last half of the film as we slowly find out who Robert is and where he has come from. When we discover that he had artistic capabilities, a pianist of some skill, we wonder why he would reject such a potentially rewarding life to live meagerly in a physically-taxing working environment.

As he's exposed to various thoughts about modernism and its pitfalls, we never see him take sides, though simple gestures and comments to quiet his girlfriend, we believe he may actually agree with all that is being thrown at him. Yet, even when he stands up to protect her from a pseudo-intellectual phony at one of his family's small gatherings of like-minded philosophers, you uncover the reason he has chosen such a life. He may agree with some of their concepts, but he has found a place where thought and reason are eclipsed by hard work and relaxation, allowing him to be normal and not gifted.

The film says a lot about how we interact with each other both in a professional and a personal manner. We associate with those who most frequently share our thoughts and opinions, but we each have a small bit of Robert Dupea in us. A part that wants to be isolationist and pensive without feeling like you have to contribute to the greater good or perform works that further society. Dupea has a measure of duality that many should possess. The ability to think without the need to fit in. Finding what makes us happy or, in reality, the least miserable and doing it instead of feeling the need to conform. And its this concept that is the core of the New Wave movement and thus making Five Easy Pieces one of the finest examples of the American take on the artform.