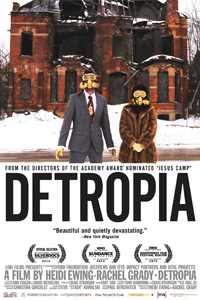 In 1930, Detroit was America's fastest-growing city; it's now the fastest-shrinking. Despite recent bailouts, the automotive industry is a shell of its peak self, with much of its remaining labor now outsourced abroad. Fully half of Michigan's manufacturing jobs have vanished within the last decade. A scene of Mayor Dave Bing (who, like most public Detroit public officials in recent years, has been accused of doing little to stop the city's slide) meeting with other City Hall officials is striking because one so seldom sees politicians frankly admitting that they have no real solutions, and worse is yet to come.

Archival clips show the once-bustling Motor City and its bedrock industry's vintage advertisements, in which gleaming new cars personified the American Dream of middle-class fulfillment. But mostly, the helmers (and lensers Tony Hardmon and Craig Atkinson) provide richly hued pictures of urban spaces that are eerily quiet, overgrown, boarded up or barely used. They also follow a handful of protagonists who've stuck it out, all of them nostalgic for whatever past they're old enough to remember.

Blogger Crystal Starr is fascinated by Detroit's history, all the more so given that she lives in and explores its myriad ruins. UAW chapter president George McGregor watches as the last of one company's local manufacturing jobs are terminated, as union employees are punished for insisting on a living wage. (American Axle moves its plant to Mexico.) Former schoolteacher Tommy Stevens presides over the Raven Lounge, the kind of joint Smokey Robinson or Diana Ross once rose from -- but who's left now to discover their successors?

Scavengers harvest trashed buildings for salvageable metals. Meanwhile, elected officials propose that highly resistant residents move to "higher density" areas in order to maximize the dead-broke city's remaining services. (Those who choose to stay behind may no longer have public transportation.) The only people who seem to be flocking to Detroit are largely white young artists and miscellaneous hipsters able to take advantage of the incredibly cheap, large downtown living/working spaces available. It's unclear whether Grady and Ewing are deliberately ridiculing this influx when they briefly focus on a newly arrived couple whose art projects seem particularly glib and vacuous.

Emerging economic/manufacturing giant China is often evoked, hovering over the film like a Stepford Wife -- a new, cheaper, more obedient model that must kill off the demanding old one. There are a few late summary statements made (speaking of the vanishing middle class, Stevens opines that when "there's no buffer between the rich and poor, the next step is revolution"), but "Detropia" is less an analysis than a poetic elegy. As such, it's by turns sad, hypnotic, a bit pretentious and at times dullish. Still, there's no faulting the first-rate tech assembly, with Dial.81's spectral score a significant plus.