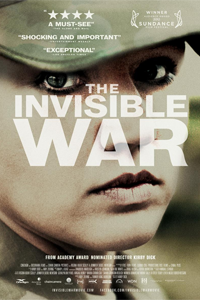 "Special Note Regarding Tonight's Film: I programmed THE INVISIBLE WAR for the Fall calendar back in July and picked the Sunday slot it currently occupies based purely on logistical issues regarding the other documentaries that were also being screened on Sunday. It was recently brought to my attention that our screening date for THE INVISIBLE WAR coincided with Veteran's Day. I have now heard from people who think this is appropriate (as the film gives voice to veterans), as well as people who think this is inappropriate (due to the uncomfortable subject matter and the way in conflicts with Veteran's Day parades and other activities). I feel both sides have merit but, either way, the alignment (for better or worse) is coincidental and an oversight. Ultimately, I hope anyone who comes to see the film will recognize its contributions to helping our veterans with a very real and ongoing problem." - Pablo Kjolseth, IFS Director

A Few Good Men is one of my favorite movies; whenever it’s on TV, if I catch it while channel-surfing, I have to watch it from wherever it is until the end. The film led me to believe that no one is above the law, even those within the tight hierarchy and community of the military, and maybe that’s true when it comes to the accidental death of a soldier after an illegal “code red” order is issued, but after having seen the latest documentary by Kirby Dick, The Invisible War, I doubt that justice would’ve been served if the offense was a rape instead. More likely, there’d be no investigation, no massive court trial with dramatic outbursts of “you can’t handle the truth” and the victim would’ve been the one dishonorably dismissed. Hell, perhaps the reporting of the rape would’ve been what led to the “code red.”

The Invisible War looks at the unspoken epidemic of rape in the various sections of the U.S. military. Lest you immediately go into defensive mode, this is not a film that makes some sweeping statements about all soldiers being deviant sexual predators, and while it is critical of those that rape, it is also critical of the system that, while not encouraging such offenses, doesn’t do enough to dissuade either.

As the film goes along, we meet and hear the stories of various military soldiers and officers, male and female, who have been the victims of rape at the hands of their fellow soldiers. Each tale is awful and tragic, but as traumatic and horrible as the actual rapes are it is often what comes after that is equally as repulsive. The victims are punished, discharged or ignored for speaking up. The rapes continue, and the system in place can only come up with solutions along the lines of “don’t put yourself in a situation where you’re tempting someone to rape you”; you know, like going somewhere by yourself. Basically, the message from the military to potential rape victims is: if you get raped, it’s your own fault.

Adding insult to injury, there is no independent justice or council set up to handle rape cases in the military, so you have a system where the person perpetrating the crime could also wind up being the one you have to report the crime to. This leads to an epidemic of silence among victims, and in the cases where the reports are made, the system is equally good at punishing the victim for speaking up.

This documentary repulsed and disgusted me, and in particular a statement near the end of the film regarding a pending court case almost had me throwing my shoes at the screen I was so angry. At the end of the day, though, that anger will hopefully lead to change, but it needs to come from more than just me. More people need to see the film to destroy the ignorance of the problem of rape in the military, and while rape may not be ever entirely eradicated, at least it could be significantly decreased if the perpetrators were investigated or punished properly.

To that end, I finish this review up with a link for you to pursue at your own discretion to learn more about The Invisible War and to take action, if you feel it is appropriate.