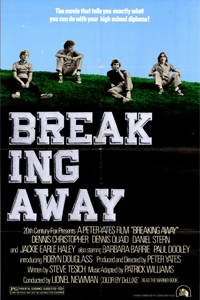 The IFS kicks off it's Fall 2012 film program with a free screening of BREAKING AWAY on Farrand Field. Its a great film about a bicycling enthusiast who is also contemplating college. In other words: the perfect film to cap the Buffalo 500 bike race taking place earlier this day, which raises money for scholarships. We'll be giving out some free IFS movie passes to anyone who wants to show off their bikes, be it a funky cruiser or custom commuter.

Dennis Cristopher plays the part of Dave, our charismatic and cheerful protagonist whose zest for cycling makes him enamored of all things Italian. For him, the fact that an Italian racing team is coming to Bloomington, Indiana makes for the greatest news ever and this helps ratchet up his training.

Jackie Earle Haley is more than convincing as Moocher – the short kid with an even shorter temper – especially if you do anything to call attention to his size. Daniel Stern (in his career debut) is Cyril – the lovable loser who can always be relied on for some comic relief. Of course, everyone recognizes Dennis Quaid – the prototype “bad-boy” hothead who smokes Marlboro’s and has the muscle-car. Barbara Barrie and Paul Dooley get special kudos as Dave’s mom and dad. They anchor things with unexpected tenderness.

Looking at the outlines for the characters above it’s still not explained how such predictable tropes can come alive with refreshing vigor, and here I must really give credit to the screenwriter. Steve Tesich won an Oscar for Breaking Away (he also would later write the script for The Wold According to Garp), and it’s pretty clear that Breaking Away was far from a cynical exploitation of a familiar formula but rather a very personal project embedded with a sincere love for the subject matter (Tesich was involved in a bike race like the one featured in Breaking Away, and based Dave’s character on David K. Blase – who makes an appearance in the film as the announcer of the Little 500 race).

Tesich went to college in Indiana and he lost his father, a machinist, around that same time. One of the most touching aspects of Breaking Away is the relationship between Dave and his father – especially as the film goes into the closing lap and we come to see that despite his gruff and xenophobic exterior, Dave’s father is really a big softie. Another side of “dad” is that, yes, he can be an unethically cheap bastard on his used-car lot – but he is still capable of redemption. Not just that, but when he pulls his son aside to urge him to go to college we finally understand where the origins to the put down of “cutters” comes from while simultaneously giving us a deeper appreciation of the contributions made to the city by the working class.

There’s a tremendous amount of heart in Breaking Away. Early on there’s one scene where Dave is training on his bike. He gets behind an eighteen-wheeler and begins drafting his bike in the truck’s wake. This could easily have resulted in a tense “truck driver” vs. “cyclist” moment but, instead, the opposite happens. The truck driver notices Dave cycling behind him and takes on the role of road-support by slowly increasing his speed and giving Dave hand signals at every increment that goes up 10 mph. The truck driver is clearly pleased at being able to help communicate to Dave how fast he is going – and he does this at personal expense, because he ends up getting pulled over by the police. Despite the ticket, the truck driver cheers Dave on.

There’s something genuine here that reaches past clichés and extends out toward humanism. Most American narratives are structured along us-vs-them paradigms that pit good-vs-evil. Sports films are normally the definition of this by their nature. You root for one team at the expense of the other. In Breaking Away, however, that line gets blurred on several occasions and, ultimately, all divisions get bridged. By the time the winning trophy is hoisted in the air, everyone’s got a smile on their face and whatever divided them – the local “cutters” from the snooty college kids, or the law-breakers (Quaid) from the law (his brother, the policeman), or the blue-collar workers from the ivory-towered elites – it all seems to disappear.

Breaking Away also deserves a shout-out for making great and repeated use of a wonderful location: a deserted quarry that has now become a swimming hole for the cutters. It has a seductive beauty that also hides various dangers – I’m thinking here of the scene where Quaid swims into a refrigerator that has been dumped into the quarry and locks himself inside of it, or where he later smashes his head against the hard rocks as he tries to outswim one of the college kids. But what’s also wonderful about the quarry is the way that it represents an abandoned world. It’s a world that belonged to the cutters parents – the real cutters who mined this quarry for materials that were then cut and used to construct the buildings of their city.

The film was directed by Peter Yates who, along with a string of other films, preceded Breaking Away with Bullitt (1968), Mother, Jugs & Speed (1976), and The Deep (1977). Some of the titles that followed afterwards were Krull, The Dresser (both 1983), and Roommates (1995). Now at 80 years of age, he’s still active and has a film in development called The Girl in Melanie Klein that is slated for a release next year.

Ah, Dennis Christopher, I hardly knew ye. After Breaking Away I couldn’t wait to see you again and remember making a point of catching Fade To Black (1980) at the theaters. The tagline for that film makes me laugh, especially since it hits so close to home: “Meet Eric Binford, the ultimate movie buff. If you know someone like him… run!” Small wonder, given the subject matter, that I found the film quite interesting and unjustly maligned. Still, that one tanked big time and after that Christopher went off to work mostly in television and has now been diligently acting for over 40 years. It stuns me now to look him up on IMDB and see that I completely overlooked him as Bellegarde in Deadwood. Shucks, no wonder he looked familiar. I’m so bad with names.

Jackie Earle Haley was already a familiar face before Breaking Away thanks to The Bad News Bears (1976) – and the sequels that followed. He was also in the short-lived TV series spawned by Breaking Away starring Shaun Cassidy. Most recently, and in an inspired bit of casting, he played the part of Walter Kovacs / Rorschach in Watchmen (2009). I’m guessing next year is going to be a very good year for him, as he’s already got three films in post-production and slated for a 2010 release – including the part of Freddy Krueger for the A Nightmare on Elm Street remake. This time around I’m guessing nobody will be making fun of his size.