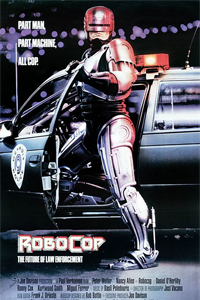 RoboCop set the tone for much of Dutch auteur import Paul Verhoeven's career in America, and not just because of Kurtwood Smith's curt command "Bitches leave!" It was a relatively low-budget, high-concept satire in the guise of a relatively high-budget, low-concept trash-a-thon. But it was so broad about its satiric aims—privatized, corporate America buying and selling not only the populace's safety, but also its endangerment, thereby exponentially increasing their profit margins—that practically no one who would want to parse the flick for its subversive streaks wanted to take the film seriously. Or to not take it seriously. Or to see it as anything other than fodder for everyone who would just as soon buy that (and, well, everything) for a dollar.

Set in a future immediate enough to still be crippled by Reaganomics, RoboCop opens with the shambles of a Detroit police force losing officers to street crime by the dozens. They and the entire industrial-military complex are owned and operated by Omni Consumer Products, a behemoth corporation whose V.P. is secretly organizing and funding the underground crime and drug racket in order that the demand (and asking price) for their law-enforcement ops shoots as high as their Blade Runner skyscrapers. Though that's merely the malfeasance of one bad apple, it's not as though the endeavors of those on the up-and-up are much more noble. The corporation's prime directive isn't really to help reform and rebuild Detroit so much as it is to build an entirely new, heavily guarded city for the haves while posting burly cybernetic droids at the perimeter to keep the have-nots at bay. (The last half of George A. Romero's similarly satirical Land of the Dead may have actually taken place in this urban oasis.)

Corporate backstabbing and a remarkably strong-willed newbie cop combine in the right place at the wrong time (i.e. when said cop gets blown away on his very first day) to allow the creation of a secret human-robot hybrid. Verhoeven juxtaposes RoboCop's faint pulse of self-recognition against the backdrop of a dehumanizing socio-economic nightmare. (One that's not all that far removed from reality in any era, such as the scene where a thug mocks the pointless ambition of a college student studying plane geometry while moonlighting a night shift as a gas station attendant.) But he also couples his skilled filmmaking vulgarity with a very literal vulgarity. When RoboCop comes to the assistance of a poodle-headed woman about to be sexually assaulted in a back alleyway, his keen trigger finger manages to take out the would-be rapist's crotch by carefully shooting the bullet through the victim's skirt—right between her thighs. Never has a gesture of chivalry seemed more…icky. Verhoeven's best and most vulgar American work was still in front of him, but RoboCop still stands as one of the most rude-tempered, rollicking gobs of spit in the face of 1980s politics this side of John Carpenter's They Live.