It's Such a Beautiful Day 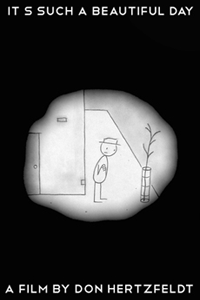 Cult animator and Academy Award nominee Don Hertzfeldt (Rejected, Billy's Balloon, the Meaning of Life) is hitting the road for a rare series of one-night-only events! A selection of Don's classic animated shorts will return to the big screen, culminating in the exclusive regional premiere of his newest film, It's such a beautiful day: the third and final chapter in a trilogy about a mysterious man named Bill.

Chapter One, Everything will be OK, won the Sundance Film Festival's Jury Award in Short Filmmaking and was named by many critics as one of the "best films of 2007."

Chapter Two, I Am So Proud of You, received twenty-seven awards and was described by the San Francisco International Film Festival as "[his] best yet... even the Hertzfeldt faithful may be too stunned to laugh."

Nearly two years in the making, the 23-minute It's Such a Beautiful Day is Don's longest, and most ambitious, piece to date: blending traditional animation, experimental optical effects, trick photography, and new digital hyrbids printed out one frame at a time, the movie was captured entirely on an antique 35mm animation stand, one of the last remaining cameras of its kind left in America.

The entire animated trilogy will be screened together for the via new 35mm prints.

It's Such a Beautiful Day