Late addition to the IFS schedule 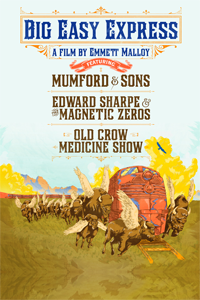 [SXSW] wrapped up on Saturday with the rollicking world premiere of Big Easy Express, Emmett Malloy’s gorgeous new documentary about the train ride Mumford & Sons, Edward Sharpe & the Magnetic Zeros and the Old Crow Medicine Show took from San Francisco to New Orleans on tour. Malloy, who last came to SXSW with his 2009 White Stripes doc Under Great White Northern Lights, told the audience that he likes “music films, films in general, that are about a journey.” This was it. The three bands hit six cities on tour, and covered thousands of miles of track. The music never stopped along the way, with concerts bleeding into joyful all-night jam sessions as the train left each station. The crowd cheered loudest during the movie when the bands rolled into Austin, where the Mumford guys played a hugely rousing rendition of their hit “The Cave” with the Austin High School marching band.

Afterwards Malloy described the fertile soil he found himself in while aboard. It’s a filmmaker’s dream to be “rolling through the country,” he said. “You lift up the shade and there’s a beautiful sunset happening and you realize, ‘I don’t even have to get out of bed.’” Marcus Mumford, the lead singer of Mumford & Sons, described the extraordinary sense of community enjoyed by the three bands on tour. “It’s the best thing we’ve ever done,” he said. “The movie really captured the vibe, it was like going back in time. [The filmmakers] never got in the way of the good times.” Pausing to laugh, he said “I feel much more self-conscious right now than I did on the train.” When one audience member wondered about future plans for the movie, the director responded that “This is the first time we showed it and I hope it doesn’t end here.”

After the Q&A, all of the musicians crowded together on the small Paramount stage for a delightful 5-song acoustic set. “It’s not a library, you can make some noise!” a banjo player encouraged. Later that night, the musicians reunited on a larger outdoor stage, under a big Texas sky on the lawn of the LBJ library. Mumford invited the entire Austin High marching band back up on stage for the last number. Those kids looked positively giddy up there, as did every single fan in the audience. “We don’t say this in every city,” Mumford told the crowd. “But we feel as at home in Austin as we do in London.”