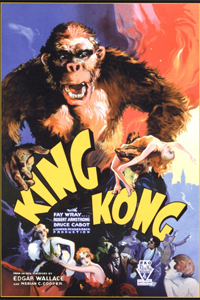 Originally scheduled in the V.A.C. on 35mm, but print pulled from us at last minute. Come to Muenzinger for a DCP presentation.

"I'm going out and make the greatest picture in the world -- something that no one's ever seen or heard!" When Carl Denham (Robert Armstrong) speaks these words near the beginning of Merian C. Cooper and Ernest B. Schoedsack's King Kong, we somehow know that he's referring to the picture we're watching right now. Even today, looking at this nearly 80 year-old film brings with it a sense of wonder and astonishment, as if all the special effects spectacles that came after it never existed.

The King Kong plot has movie producer (or "picture maker") Carl Denham traveling to lands unknown to make a new film with his latest discovery Ann Darrow (Fay Wray). During the trip, she falls for the ship's first mate Jack Driscoll (Bruce Cabot). When they arrive on the uncharted island, they discover a band of natives who live in fear on one side of a great wall, a wall designed to keep out the giant ape known as Kong. After a great battle and great losses, Denham captures the beast and brings it back to New York for a show, but Kong escapes and climbs the Empire State Building, creating one of the cinema's most indelible images.

The film itself is, of course, a special effects wonder. Technicians made the giant ape from a combination of oversize body parts, small models and stop-motion animation. But although the technicians' fingerprints are visible from time to time on Kong's body, his movements are sublime. He actually gives a performance, moving fluidly and actively, depending upon his mood.

King Kong is also notable as being perhaps the first film to use an all-original score instead of bits and pieces of random classical music. Max Steiner's thundering adventure music would even stand alone on a soundtrack album as its own listening experience.

But beyond that, King Kong is all things to all people. It's a romance, both straightforward (man meets woman) and subversive (ape meets woman). It's a bizarre poem ("'twas beauty killed the beast."). It skewers the exploitative nature of showbiz, while at the same time thriving on it. It's one of the rare, great works of art that stands up to endless repeated viewings, each time revealing something new.